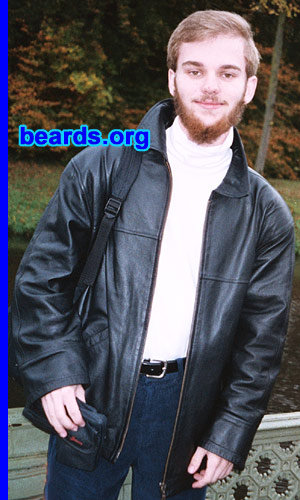 Photos are courtesy of Michael and are used with permission. All photos are subject to the site’s conditions of use. Click on the photo to go to Michael’s photo album.

I always thought that people with something in common form groups and share information, so why should bearded men be any different? I just typed “beard” on Google, and this site was one of the first matches I got. The rest is history!

It did not influence my initial decision because I had a beard for about a year when I found this site. Instead, the site motivated me to go on growing it. It reassured me that I am not alone and that many share the idea that men should be bearded.

It’s kind of funny, because the first time I contacted the site by email was to seek guidance on how could I make my beard grow thicker and longer. I found out that only time may help me, but it was also the first time that somebody who shares the beard concept “reviewed” my beard and gave me a positive comment. It pushed me forward!

Yes. The information on grooming is very useful indeed. From the site, I learned for the first time about a thing called a beard trimmer and how to use it correctly. The site helped me to learn how to groom and shape my beard into different styles and forms and how to keep it neat! Never before had I seen so many different, cool, and stylish beards in one place!

No. I never thought of giving up. The beard is a part of me and people must accept it as a part of me. If someone doesn’t like it, it’s their problem. I love my beard, and I have no reason to get rid of it! The site showed me that I am not alone.

I have a five-year history of facial hair experimentation. That is a long time, considering that I am only seventeen and a half! I started growing facial hair quite early. I had a small mustache by the time I was twelve. If I would have wanted to be “clean shaven” (a wrong term! Beards are not dirty, and a hairless face isn’t always clean.), I would have had to start shaving by that age.
The growth continued, naturally, and by the time I was thirteen and a half, I already had a beard. It wasn’t much: only fuzzy, half-transparent hairs on the chin, cheeks, and the mustache. It started looking like a real mustache by that time. If only I had pictures of myself from that time…

My face remained like that for about a month. Then my dad bought me my first shaver (which I still use today for shaping the neck line) and told me about shaving. That was the first time that I learned about facial hair styles and shaping. At that time, I started shaving. At the beginning, I only wore a mustache. With time, I started growing sideburns that got bigger, bigger and bigger!

By the time I was sixteen, I made the decision to grow a beard instead of just having a mustache and sideburns. The growth was slow at first, but got better with time. As seen in my photo album, my beard had changed its look over time, but has always remained a variation of the basic full beard.

There is, however, something that I don’t like about my beard growth: it’s unbalanced! The growth on my chin (especially at the center of the chin and the area between the chin and the “imperial patch”) is much slower than on the sides and neck (or even non-existent). The growth on the neck has a similar characteristic: the hair on the sides grows faster than the hair in the center! And if that is not enough, the area that is supposed to connect the mustache and the beard is not growing well, leaving the beard and mustache not fully connected. And strangely, the hair on the right side of my face grows faster than on the left side.

With my unbalanced beard growth, I can’t grow a good goatee. Besides, a goatee is too small for me. I like the masculine, natural, mighty look of the full beard. What better way is there for a man to declare to all who see him, “I am a real man” than having a thick, well-groomed, full beard? Anyway, this is the way of nature and my style of choice. Of course, it needs shaping to be kept well-groomed and neat. The style I am trying to grow (but is hindered by the weird growth pattern) is what I call the “full Van Dyke”, a full beard that is wedge shaped. For now, I also use my trusty shaver to keep the neck line clear and the neck below that smooth. I trim my beard every three days for the optimal look.

I love it! It makes me look wiser, older, and much more masculine. I am only 5′ 7″ (170 cm) tall, so without facial hair, I would look like a kid. With the beard, I look like a man! People tell me that I look like twenty-one or older. It’s great! I also feel much better about myself. I feel that I am truly a man. It’s a means of self expression…

Actually, no. At my age, it’s a long process… When growing my beard into a new shape, I just can’t wait for it to grow already!

Most people are shocked that I have a beard, being this young. Considering that many young men cannot grow any type of a beard (especially a full beard) at this age, most people think it’s quite unique and unusual. I am among the few guys in my school who have beards. Most of the people I know do not have beards, so my beard draws the eye. Most of the feedback I get on my beard is not positive or negative, but simple curiosity. People are very curious about how a man my age has a full beard.

Some people have told me that it’s cool and manly. Some have said that it’s ugly and even repulsive. The most common comment I get is that it makes me look older. That’s good. Others have said that it makes me look wiser, that I look like a Greek philosopher. I love that one. Sometimes I am told that I look like a lumberjack, or a “man of nature”. That spurs my imagination…

At school, new students have asked me, “What class are you teaching this year, sir?”. They asked this even though I was wearing a school uniform! Some think there has to be a connection to religion, so I often get questions and comments relating to various religions. A guy at the gym asked about the beard and commented, “Man! you should had been born 150 years ago! Back then, all men shared your thoughts about facial hair.” If only I had a time machine…

While on a cruise, I got, “Wow! Did our ship pick you up on a desert island?” More frequently I am asked simply, “Why?” Other questions I get include, “Why have a beard at that young age?” or “Wow! How did you manage to grow such a beard at your age?”

And there are the bad ones too: “What the…is on your face?”, “That’s scary!” (What could be scary about a beard?), “That makes you look like an old man.”, and the simple but stupid, “That’s just ugly.”

Different people respond differently to my beard, and that’s only natural. But it matters not. A true man knows to hold his ground and remain a unique individual in his own way. Like it or not, my beard is here to stay. So you’d better get along with it!