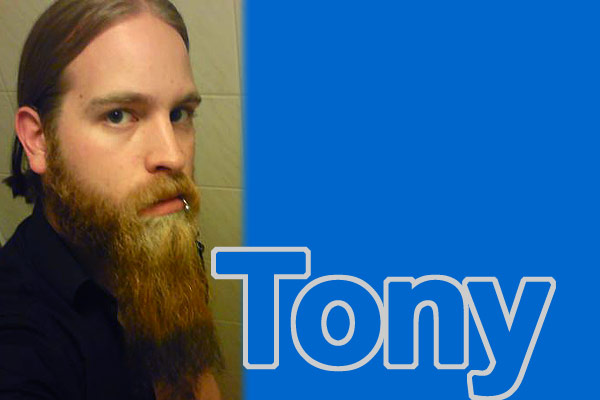 Tony joins the featured beards section from merry old England, where he works in payroll and human resources. Outside of work, Tony’s interests include motorcycles and chess. A biker himself, Tony currently owns a very nice Vulcan. He likes to go to motorcycle rallies where he enjoys meeting other bikers. An avid chess player, too, Tony plays for the Leeds chess club and competes in chess
competitions all over the country.

Tony is also interested in art, piercings, and tattoos. He already got a new piercing during the preparation of this beard feature. Some of Tony’s other favorite activities include going to see bands and spending time with his girlfriend Dani. 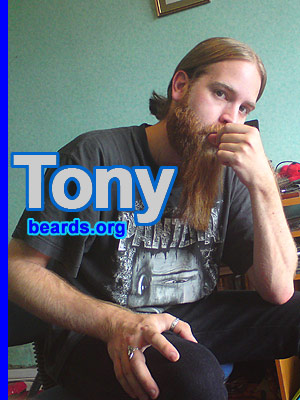 all about beards is pleased to include the story of Tony’s terrific beard in our featured beards section. Also, be sure to visit Tony’s photo album.

The photos on this page and in Tony’s photo album were provided by Tony and are used with permission. All photos are subject to the site’s conditions of use.

I love beards. But for me, the more impressive a beard is, the more I respect its owner! If you can grow a huge beard then it has to be done. Beards are a sign of masculinity and we wouldn’t have been given the ability to grow one if we were not meant to have one. As I am also into the “alternative” scene, I like people to look different and not like a herd of sheep as it were.
Beards are as varied as personalities. Therefore every beard is different and should be part of any man’s personality.

Since school I have always dabbled and tried loads of different styles. Oer the years, I’ve grown more and more to like beards. I also believe that beards really suit my face and that they also go really well with my “alternative” image. Also, I’ve dated girls who have hated beards, however, my current girlfriend loves them and therefore it’s encouraging me to do something I’ve always wanted to do, grow it even bigger!

To be honest, I’m not sure I really wanted to grow a beard before I could grow one. I remember my father’s mustache from when I was a kid and I remember food getting stuck in it, etc. Once I was old enough to grow my own, however, I was quite happy to. I think that would have been at about thirteen years old. I was one of the first in my year at school to be able to grow a decent beard!

Not really, there were just my father and my grandad who had their moustaches. I guess growing up listening to rock/metal music and seeing band members with big beards was the biggest influence. Now my beard is better than most of theirs! It’s just something that has developed over the years whilst trying different things. My main influences would probably have been the late “Dimebag” Darrell of Pantera and Wayne “Static” of Static-X.

Have you ever grown a beard before this one? What motivated you to grow your beard for the first time? How old were you?

I’ve always had beards or big sideburns since I was first able to really grow facial hair, so it’s quite hard to say. I have chopped and changed over the years, but I don’t think I’ve ever been without. I would say it’s because I don’t like shaving, but some of the beards I’ve had have been so precise that shaving has been harder. It’s obviously a doddle now because of the full beard, but I just love beards. 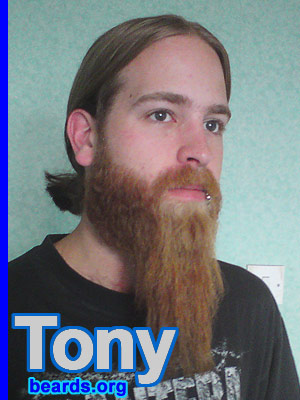 It turned out really well. Actually, I’m one of the lucky ones as I can grow hair all over my face without any patches. Some other kids at school tried to follow my lead and grow their own, but they all ended up being patchy and rubbish — if I’m honest!

I selected this style because the bigger the beard, the better. I can grow hair really fast, so not only do I like the huge beard but also it’s also easier for me because of the ability to grow hair so fast! I’ve had other varied styles, but mainly different kinds of goatees and huge sideburns. My most memorable beard was the goatee and sideburns when I used to braid the beard until it was about a foot long! To be honest, I wish I’d never cut it so short. But it’s on its way back now.

Growing beards that are different or unusual has made me a stronger person. This does reflect in my personality as well. It’s made me a more confident person. The bad remarks have toughened me up and taught me to stand up to people with narrow minds. The positive comments have been good for the confidence side.

That is a really good question! I’ve had both bad and good comments. Although now that I’m being more confident as a person, the comments now are pretty much all good. I guess that’s because people don’t see me as a weak target anymore.

I don’t mind the comments. Sometimes it can get to be a little too much and can make me feel like a celebrity. The most common thing is someone coming over, telling me how much they like my beard, then asking if they can touch it! I also get frequently asked questions such as, “How long you been growing that?” or “Does that beard ever go into your pint glass?”.

I often get people driving past and shouting out of their car windows comments like, “Get a shave!”, “What’s that on yer face?” or just random people screaming out of their window while driving past. I also get confronted from time to time by groups of lads when I’m own my own, threatening to rip my beard off my face and other impossible threats. When I stand up to them though, they usually just back off and leave me alone. As long as I let these people know that they are cowards, they always walk away feeling stupid.

A couple of weeks ago as I was walking through town to my Sunday goth night, about four lads (who were all bigger than me) walked past, one said, “What the devil is that?! Is that some kind of charity thing or something?” I just laughed and carried on walking. Then I heard a load of shouting, so I turned around to see what was going on. One was blatantly shouting abuse at me while one of
his mates was holding him back, I shouted, “Just because you can’t grow beards!” All four of them started shouting and one said, “Say that again and you’ll regret it!” So I did, then I laughed and they walked off. Obviously I really regretted that then!

Once when I went into my local newsagent, an Asian guy behind the counter asked me, “Do you tug a lot?” So I responded, “Sorry?!” He then went on to say, “Where I’m from, it’s tradition for us to pull our beards every night so that they grow faster.” I’d never heard this before but am pretty sure that it’s just an old wives’ tale.

I understand that you’re a bit of a chess fan. Does your beard affect your chess playing in any way?

When it was longer, yes I had a few problems playing chess bearded. I have been known to knock the odd piece over with my beard. To be honest, I’m actually very lucky that I haven’t had a match defaulted against me!

You indicated that you are a dedicated permanent beard grower. How did that happen?

The fact that it looks good and a lot of men are jealous of me!

I like the thickness of it. I have seen people with beards similar to mine, but you can see through them — really thin and wispy. But mine’s really thick. It’s what I like to call a proper beard!

I take a lot of pride in my beard and I look after it in order to make it looks as good as possible. Every morning I dampen it and blow-dry it into place so that it’s not in a mess. I never brush it because I prefer the more “wild” look. Having said that, I blow-dry it because I like to style it to look wild and not like I’ve just gotten out of bed. How do I go about rating my beard?
I’ve never thought about that before, but it’s definitely one of the best beards in this country anyway!

I’ve learned that growing a beard takes a lot of patience in both growing the beard itself and in deciding the kind of beard that best suits you.

I certainly would. If you can grow a beard, then go on and grow one!

I think it’s fantastic. I have an amazing beard and I would love to share it with other beard growers and fanatics across the globe.

It’s the best beard web site on the planet! It has so many features and the gallery is always being updated. This makes me want to log in on a daily basis to see what beards are being produced.

Click on the image below to go to Tony’s photo album. 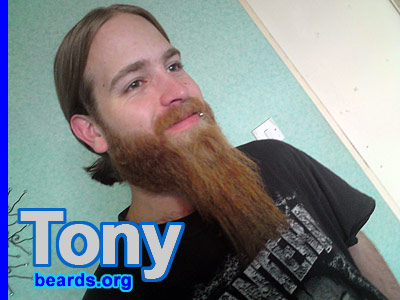