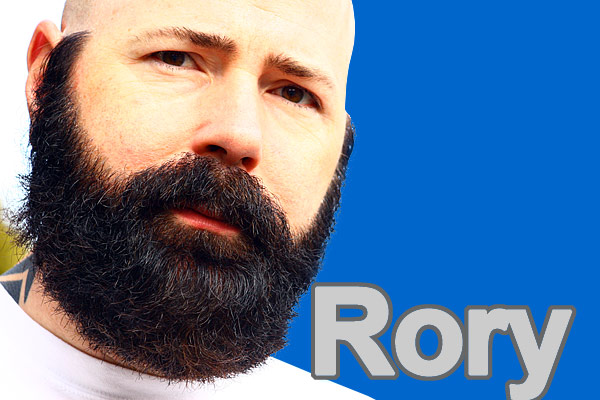 Rory joins our featured beards section from Portland, Oregon. Portland is a sort of “beard territory”, as beards there are more commonly found than in other parts of the county. A painter, Rory is an example of a bearded artist. At home in Portland, Rory enjoys riding his bicycle, painting in his studio, hanging out with friends — and of course, growing his beard.

Scroll down to read the story of Rory’s glorious beard. Also, be sure to visit Rory’s photo album. All photos in Rory’s beard feature were provided courtesy of Rory and are subject to the site’s conditions of use.

I am a visual artist, a painter. There is something visceral about they way a beard looks on the face. The shapes created by the positive and negative space are wonderful. I also really like that a beard is a guy thing. Women can’t grow one. It’s one of the divisions of the sexes that is natural and distinguishes without judgment.

I am blessed with a nice looking and full beard (for which I am very thankful). I grow mine in celebration of one of my natural gifts.

None of my family members ever had beards when I was growing up or even now. I don’t think any of the men in my family having one or not was an influence.

You said that you initially grew your beard as an experiment. What triggered that experiment? Had you never thought of growing a beard before?

After puberty, my mustache came in first. I wore a mustache in high school. In college I wore mutton chops. After college I experimented with various goatees and settled on the chin curtain that I wore for several years. Growing a full beard with the mustache was an experiment for me. I always loved my chin curtain, but didn’t feel including the mustache was as becoming on me. So the full beard was an experiment with also donning the mustache. I have been fully bearded for about a year now. I love it and plan on keeping it full and longer for a very long time.

I feel more confident with a beard that without, for sure. My beard is an appearance enhancement that I love to wear!

Do you compare your beard with other beards that you see? Do you have a sense that your beard is special — of exceptional quality or stature? How does that make you feel?

I check out every beard that crosses my path. I love almost all of them. Each one is slightly different, has different texture and color. I love the variety as well as the surprise when I see one that really impresses me. It’s exciting. I think mine is above average, but in a way I can’t describe very well in words. I think the “specialness” of mine has as much to do with its natural qualities as with the care and grooming I give it.

What does being a “beard fanatic” mean?

It means that I never miss the opportunity to check out others’ beards and enjoy seeing them.

You indicated that you are a dedicated, permanent beard grower. How did you reach that decision?

I simply cannot imagine my life without my beard. Recently I went back to the chin curtain and cut quite a bit of length off the rest of my beard. I was heartbroken until it grew back in.

I generally get positive comments on my beard. Mine seems to be one of the ones that gets some admiration from other people. I do quite enjoy that.

There is something wonderful about the uniqueness of each man’s beard. I am glad to be contributing yet another beard to the mix.

For me, mine has just right balance of curl and straightness.

I wish it grew fuller, further up on my face.

I would recommend every guy at least try it once. Then if they don’t like theirs, at least they gave it a try.

I am very excited about it! I have wanted to be a part of the group of featured beards on this site for a long time.

What brought you to visit beards.org?

A friend of mine discovered the site and pointed me to it. I have loved it since.

It’s unique and terrific! I love it.

Some of Rory’s earlier beards:

Click on the image below to go to Rory’s photo album. 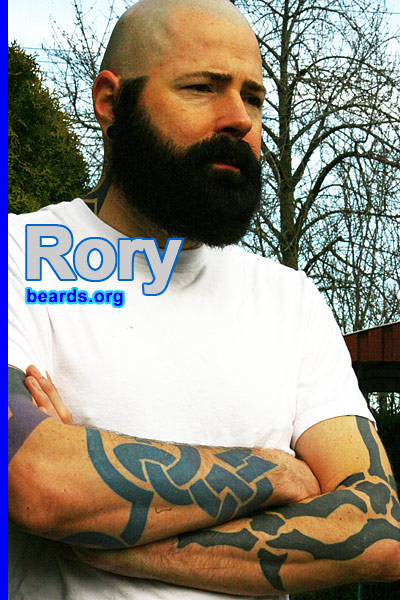