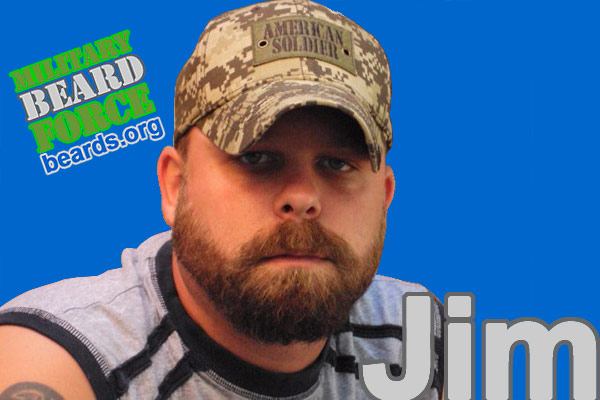 Jim is another great soldier for the bearded cause. So many men grow beards after leaving military service that they deserve some special recognition. Beards.org is honored to have Jim as the first to be featured as part of beards.org’s upcoming MILITARY BEARD FORCE section.

With his military service behind him, today Jim is the Senior Systems Engineer for a company that specializes in both laser and live-fire weapon simulation systems for the military and law enforcement. Jim is a technology enthusiast and is currently teaching himself web design in his spare time. He is also a huge football fanatic.

Also, be sure to visit Jim’s photo album.

The photos on this page and in Jim’s photo album were provided by Jim and are used with permission. All photos are subject to the site’s conditions of use.

Did you ever grow a beard before entering the military?

I never grew a beard before the military because my facial hair was just too thin and scraggly.

When did you first notice the desire to grow a beard?

As soon as I got out of the military my desire to grow a beard was very strong. That is when it all started.

What kind of beard-growing were you able to do during your years in the military?

I wasn’t able to grow a beard while I was in the military.

Did the daily shaving requirement in the military help drive your desire to grow a beard?

You’ve mentioned that after you got out of the military, you became obsessed with the beard. What’s the story on that?

When I was in the military, I was basically considered property of the US Government, which meant that I had to obey all of the rules. One such rule was shaving everyday. When I got out, growing my beard was a sign of freedom for myself. It was the “new” me!

When you grew your first beard, did you go for the full beard?

I actually went with the goatee and mustache for a while because I didn’t think that I could grow a full beard. I eventually just let it all grow and was very surprised at the results.

How did you feel about how your first beard turned out?

I was pleasantly impressed with my beard when I first grew it out.

You stated that you are a dedicated, permanent beard grower. What is it that keeps you permanently bearded?

For me, being bearded is a sign of freedom and strength. Plus I like the way that it looks.

Are there any other bearded men among your relatives or are you the family’s beard pioneer?

My brother has had a beard for many years and my father will grow the occasional beard. 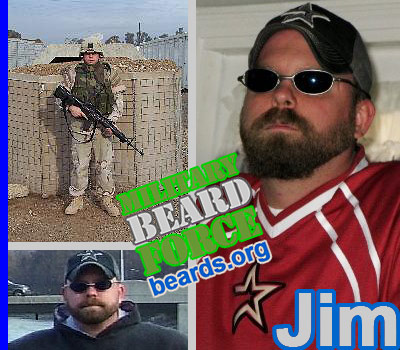 How do your family and friends feel about your beard?

My wife doesn’t care for my beard at all. She prefers my baby face because that was how she met me. Most of my friends like it.

I get mixed reactions all the time. Some people like it and some don’t. The important thing is that I like it. Other people’s reactions have no effect on me.

Do you feel free to grow your beard the way that you want? Or do you feel some pressure from others that affects how you maintain your beard?

I get pressure from my wife all the time about how she would like me to maintain my beard. I think I have finally gotten through to her that I do it for myself and I really like it. So she has grown to accept that.

Do you feel that having a full beard sets you apart from the crowd? Does it boost your self-confidence?

I think beards are a sign of freedom, strength, and confidence.

What is the best thing about having a beard?

The best thing about having a beard is the feeling of freedom and the confidence that it gives me.

I just wish it would grow faster. I also have very sensitive skin and when I first start growing out my beard, my face breaks out like crazy. I hate that.

The main thing that I have learned is the self-confidence that having a beard gave me.

Do you know any other former military guys who grew beards after leaving the service?

All of the guys I know grow some form of facial hair once they get out. I truly believe that it has something to do with the freedom of being out of the military.

How did you find beards.org?

I was doing a search on Google for tips on how to trim a beard and stumbled upon beards.org.

I think it is really cool! I never expected to be given the opportunity.

My first thought was WOW! — a complete site dedicated to the beard! So much information and other beard enthusiasts much like myself. Awesome!

Click on the image below to go to Jim’s photo album. 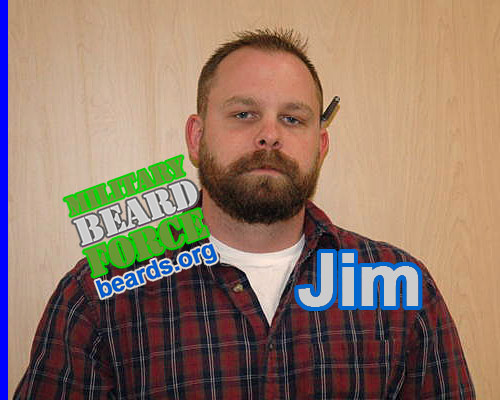