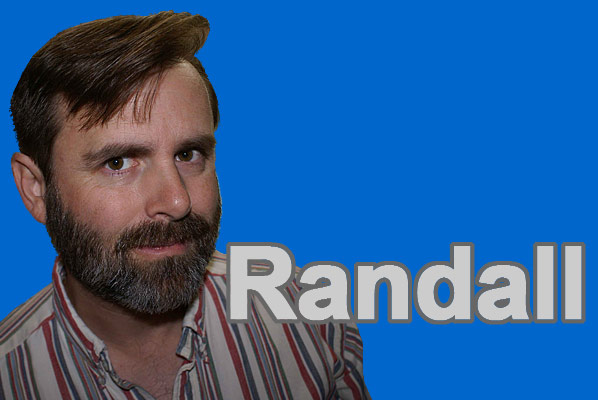 “You probably couldn’t find someone more against growing a beard.” — Randall 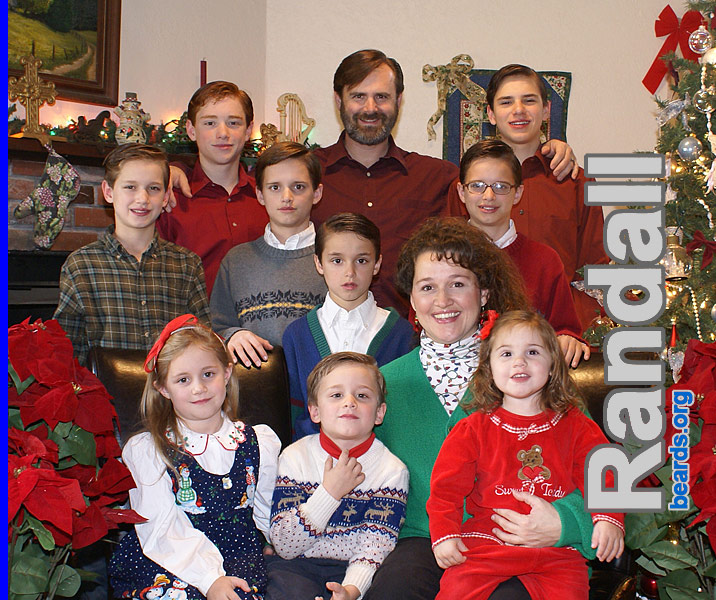 Randall’s beard story is one of the most important here on beards.org because it shows that even the most adamant against growing a beard can experience a remarkable transformation and change of heart!

When asked to tell us something about himself besides his beard story, Randall replied:

I’m a Christian — by that I mean someone who has been saved from sin and Hell by Jesus Christ. As such I take following the Bible seriously because of wanting to be a disciple of the Lord. God has called me to be a minister. And I now have the privilege of leading a small congregation in California.

My wife is my best friend in the world. We have been married now for seventeen years and have nine children — seven sons and two daughters. It took us a long time to finally get a girl — she was number seven, the perfect number. My wife wanted her to have a sister, but we got another boy before getting a second girl. The kids are complaining that we now have an “odd” number in the family, so we’ll see. The kids range from two to fifteen, and I wouldn’t trade them for anything.

Besides family and church, I enjoy music and play the piano and organ. I love cycling and weight lifting for physical activities. I’ve always enjoyed the history of railroads and have dabbled in model trains down through the years. Art and architecture are another fascination of mine, particularly after having grown up with a builder as a father. Finally, photography has been a favorite pastime, though now it is mostly for family memories.

If I had a life’s motto, I suppose it would be to “seek first the kingdom of God and His righteousness.” There is no better way to live.

Be sure to visit Randall’s photo album.

The photos on this page and in Randall’s photo album were provided by Randall and are used with permission. All photos are subject to the site’s conditions of use.

Before growing a beard, what was your general impression of beards?

Well, I grew up in a very conservative home and church. In my tradition beards were associated with “hippies” and the rebellion of the ‘60s and ‘70s against God, country, parents, church—authority in general. It wasn’t the beard that was “sin”, it was the attitude that typically went with it. By the nineties the “hippie” association with the beard had generally receded in American culture, and today the beard taboo has virtually disappeared within my conservative groups. Personally, though, I still was never very fond of them, though I’m not sure I ever really thought much about it. Two of my closest friends, however, had beards and that didn’t bother me in the least. Unless it was something far out, I can say that I didn’t really pay attention to beards.

Before growing a beard, did you ever contemplate your beard-growing potential? Did you realize that you could grow a really great beard?

Not really. I have toyed with the idea of growing a goatee and mustache several times, but never did it. It just seemed like it was faddish and would come across as me trying to look “in” or “young”. When my wife and I were dating, I went for a week or so without shaving, so I knew that I could grow one pretty fast. I never dreamed that it could be “really great” though.

Did any of your relatives ever grow beards? If so, did that make any impression on you?

No one in my immediate family had so much as a mustache. My father and both grandfathers were always clean-shaven. That just seemed normal to me. Some distant relatives had facial hair, but the only impression it left was “scraggly”, which wasn’t me.

I’ve already mentioned my background, but that really wasn’t the reason now. One of my friends with a beard was trying to convince me to grow one just six months ago, and I adamantly refused. I just didn’t think it would fit me. In my mind beards were for hunters, trappers, and mountain men — which I’m not. As a minister I am concerned to keep a neat and professional appearance, and in my mind a beard just wouldn’t fit that for me. I’ve also gained weight over the years (too much good cooking and not enough exercise) and
thought that a beard would only make me look fatter.

What did it take to get someone as anti-beard as you to start growing a beard?

It’s kind of funny actually. I developed this rash or something on my face, and it wouldn’t go away. You can see it in some of the pictures. After three months and lots of medication trials, my wife suggested that I stop shaving and see if it would help. I resisted for a while, but finally gave in.

You reported that you started out hating it at first, but you experienced a transformation. What’s the story?

It did itch some, but it was mostly because it looked, well, exactly like what I hated—unkempt and scruffy. One friend said I was looking “salty”. About two weeks into it I had to preach and thought I couldn’t go into the pulpit this way, so I guessed at how to shave some of the edges and clean it up a bit. A day or so later it struck me that it actually made me look thinner and that it didn’t look so bad after all. It also didn’t hurt that my wife liked it!

How did the reactions of others affect your attitude towards growing a beard?

A number of men in our church have beards, so there were no objections there. In fact, almost everyone has been positive. Oh, there’s been a little razzing from old-time friends, but nothing negative. My friend who had tried to get me to grow one six months ago laughed for ten minutes when I mailed him the fourteen-day picture. He’s threatening harm to me if I shave before he and his family come to visit. I would definitely say that most have encouraged me to keep it. I was surprised at how little effect the beard has had on our kids as they observed their dad’s looks change so drastically over the past several months. They like it, and now -— according to their own words —- they have forgotten what I looked like before.

What led you to find beards.org?

Well, like a typical man, I asked directions AFTER the fact. I had shaved the edges on the twelfth day, but didn’t have any idea what I was doing. So when I was done, I went and Googled “beards” to see if I could learn how to do it, and your web site came up. I was hooked.

How did beards.org affect your attitude towards growing a beard?

I saw lots of men with beards that looked great—neat, trim, and professional. It helped me to see various styles and ways of trimming it, and that it was possible NOT to look radical, faddish, or “salty” even with a full beard. It really encouraged me to let it grow out some length to see what would happen. I’ve been continuing to grow it, and have only done an accidental trimming of three-eighths of an inch about five weeks into it (gouged a hole in the beard, and had to even it all up), and then a little trim around the sides at two months (besides the twelfth day chop job).

Has growing a beard changed you?

I’m not sure that it has; in fact, I find that I’m trying to show people that I haven’t changed —- it’s still me. My wife says I’m more amorous. So I guess that is certainly a positive change! I also find myself noticing beards for the first time —- whether it’s thick, full, trimmed, etc.

Has growing a beard affected how you view yourself? Has it bolstered your self-confidence in any way?

Other than what I’ve mentioned, I haven’t noticed any changes, although there is a sense that growing a beard is a uniquely masculine trait.

What have you learned from the beard-growing process?

Well, I’ve learned a lot about beards and facial hair. I’ve been told from the beginning to be sure and put conditioner in the beard, so I’ve been doing that. Can’t tell you what would happen if I didn’t, so no experience there. I’m also still trying to figure out how to trim it, and don’t yet know its potential or when/how it looks its best. 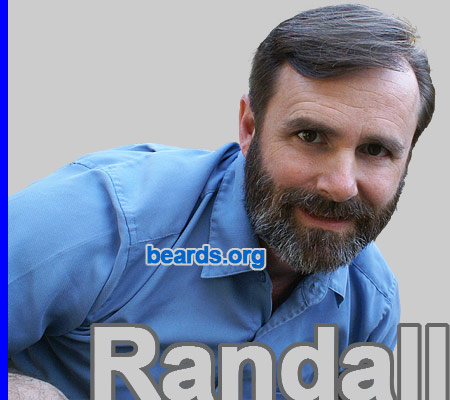 Have you enjoyed the beard-growing process?

Oh yes; it has been such a great experience for me. I’ve really been surprised at how enjoyable it has been to see how the beard grows and what it looks like. I like the feel of it and the masculinity that it conveys. It has also kept my face amazingly warm when biking on a cool day, which is really nice.

You have grown the full beard. How did you choose to go with that style?

Well, I guess the whole point of curing the rash was not to shave, so I didn’t really have a choice. The skin problem has not gone away, though a doctor has been looking at it. He thinks that it was actually caused from shaving and that some men have to stop shaving to resolve it —- too bad, eh? We’ll just have to see what happens.

Yikes, I don’t know. It seems to be growing in nicely without being patchy. I was shocked when you asked it to be a “featured beard” because I didn’t think there was anything special about it.

I guess it would have been nice to grow one when I was younger so that I could have seen it without the gray hairs. Oh well.

Do you think you’ll be keeping the beard from now on?

Whether the skin problem goes away or not, it is definitely something that my wife and I like. It may not be permanent, but it will now be an option when a change of scenery is desired. For now, though, it is still growing, and I’m still experimenting and learning. As I mentioned, almost everyone is encouraging me to keep it. Of course, my mother hasn’t seen it yet. (Love you mom!)

Would you recommend to others that they experience the process of growing a beard?

YES! I’ve already been steering people to your site. If you are thinking of growing a beard, I encourage you to follow this site’s recommendations. Don’t touch it for several weeks at least; get past the itchy stage (which in my case was only a few days and not really that bad); try a full beard and go from there.

Click on the image below to go to Randall’s photo album. 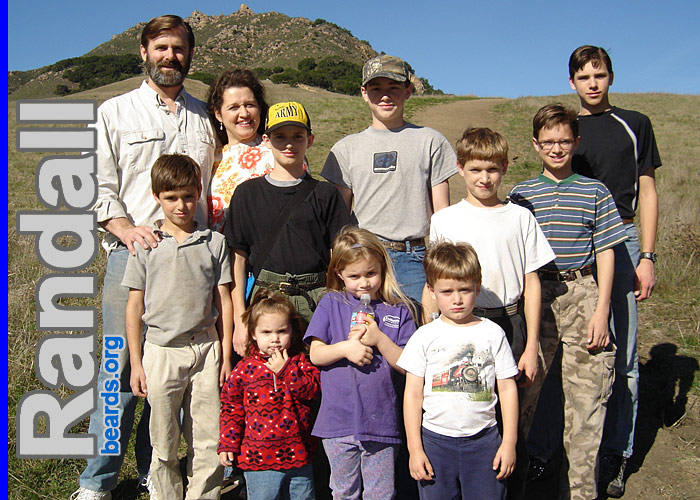