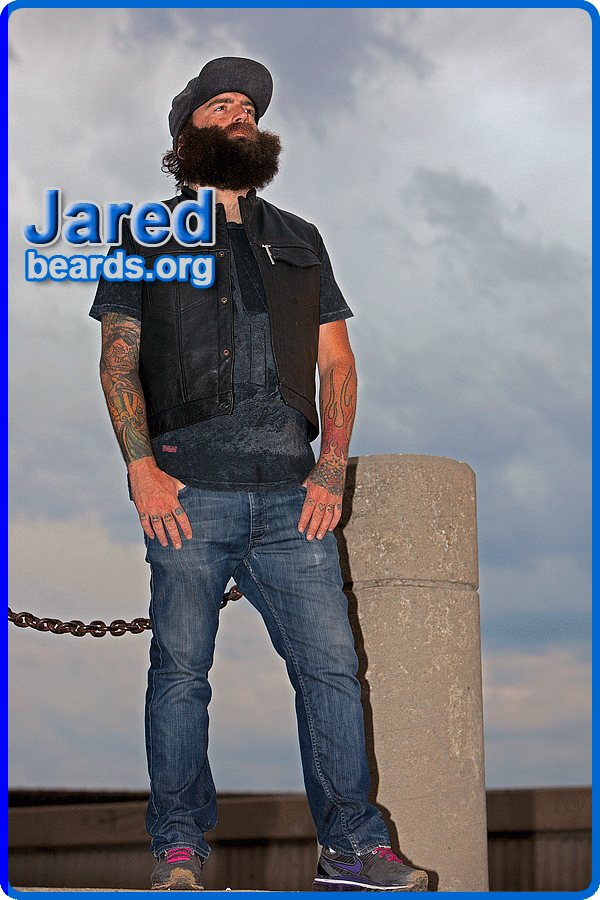 The power of the beard

Beards.org is proud to add Jared to the featured beards section. Jared’s beard absolutely demands and commands attention. It provokes stunned reactions and leaves others speechless. He is going for full power now. His beard feature includes photos taken over time in a series of official beards.org photo shoots. The beard is bigger each time. It is even bigger now. You have been warned.

Scroll down to read Jared’s story. Then, be sure to visit Jared’s photo album.

The photos on this page and in Jared’s photo album are from his official beards.org photo shoots. All photos are subject to the site’s conditions of use.

Beards and facial hair have gone in and out of fashion for centuries. I am a fan of the look and the dedication that it takes to wear the full beard. 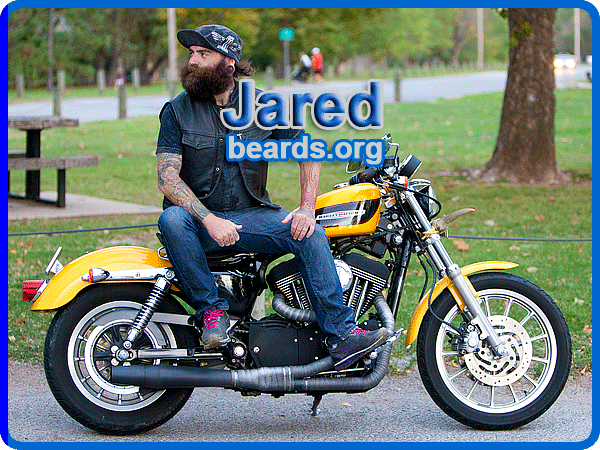 What do you think a beard says about the man who grows one?

It depends on the beard. If you have a short, trimmed beard, this says nothing to me about you. Short beards are completely socially acceptable in today’s society. Growing a large beard is met with both admiration and praise as well as disgust and fear because it’s not conforming to what is the norm. For me, having a large beard is a very empowering experience. In the circles of people that I run in, it gets you more respect points from the get go. People’s perception of knowledge has a lot to do with age, and I look at least ten years older with my beard grown long.

If you could grow a beard like mine, it would be a crime to not have it. Not everyone is blessed with good beard-growing genes like me.

My dad had a thick and full, Kenny Rogers-looking ’80s beard back in the day. My grandpa on my mom’s side could grow a great beard, but never did. The combination of these genes is the secret to my beard growing success. 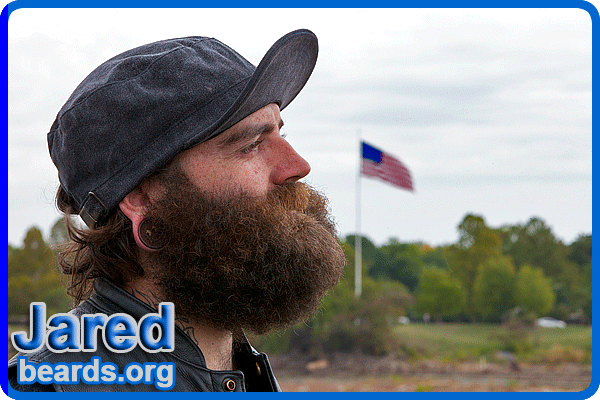 I liked facial hair, but the full beard wasn’t the style I was into then.

Do you remember when your facial hair started to develop? How old were you? What did you think of it?

When I started shaving, I didn’t really want a mustache. I was about twelve or thirteen and I wanted to be a kid forever. So I hated the look of hair on my upper lip. I felt it made me look “dirty” and “older” So I was diligent about shaving it. I definitely experimented with other facial hair styles (goatee, chin strap, fu manchu, chops, etc.).

I would say it was about 2005 and that was my first full, long beard. I was twenty-eight. 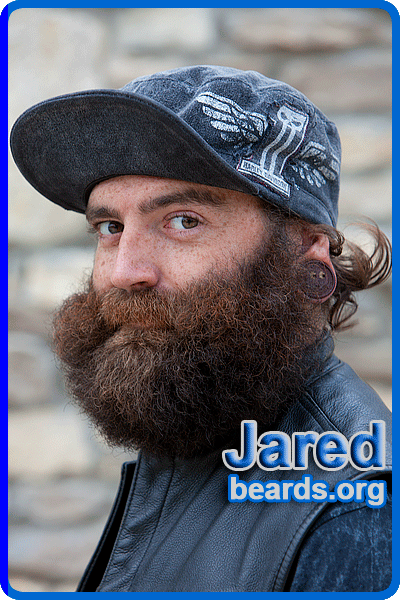 It was pretty good, no patchy spots, but not as thick as it is now.

What happened to your first beard?

My girlfriend at the time didn’t like it long. She preferred a short kept beard.

How long was it before you grew another beard?

Do you usually keep a beard all the time?

For years now I have rocked the long power-beard or some form of partial beard. But a short beard is also sweet, ’cause there isn’t the same maintenance that you have with the full beard. 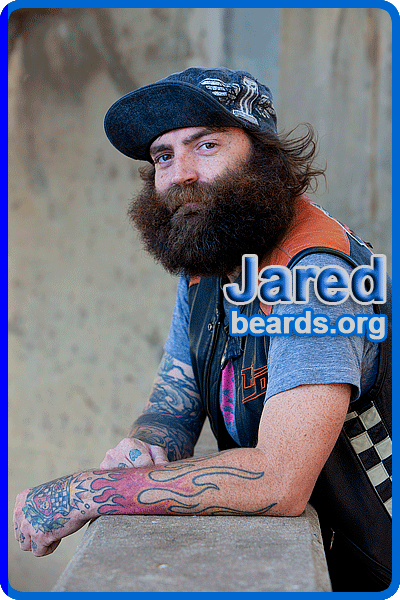 Do you consider yourself a dedicated, permanent beard grower?

I don’t know if you could call me a permanent beard grower. I will probably always have some form of facial hair… And if I don’t have any facial hair on my face, don’t worry. It will be back in
one form or another in a few hours.

My beard is exceptional and the power that it gives me is unearthly. To trim it would be unnatural.

Have you tried any other style of beard?

I really enjoy wearing other styles of facial hair, especially the curly mustache. I can curl my ‘stache and sometimes enjoy the look of the styled mustache and full beard.

What are your beard-growing plans?

I have decided to compete in the Beard Team USA National Beard and Moustache Championships to be held in Las Vegas, in November 2012.

Has your beard had any effect on your self-confidence or how you see yourself?

My beard is the only one like it in the world. I’m blessed to have it.

Do you think your beard intimidates those whose beards are far less powerful than yours?

My beard garners a response, either positive or negative from almost everyone. Whether or not you are intimidated by me is your problem. I don’t see many beards as thick as mine.

What would you say to those with “lesser” beards?

What kinds of reactions do you get to your beard?

Often times I get laughter. Some people turn to the friends/family and say, “Look at that dude’s beard.” I’ve had people come up and grab it…not cool. Sometimes people touch their beards when they see mine…. And I truly hate it when anyone references Peter Griffin and having birds in my beard. IT’S NOT THAT FUNNY. When my beard was shorter, people always said that I look like Zach Galifianakis. Also, people always want to know how long I’ve been growing it.

How do you feel about any compliments you get on your beard?

Flattery will get you everywhere in life… Let’s say that I’m usually a pleasant person to be around, but hey, I have also been known to be a total jerk if the mood strikes me right. That being said, if you just so happen to be the fifteenth person in a row who wants to talk to me about how awesome my beard is, and I’m not in the mood to have the same conversation about the same #%@ing s#%t on repeat…things could get ugly. But for the most part, beard compliments are gravy, baby. 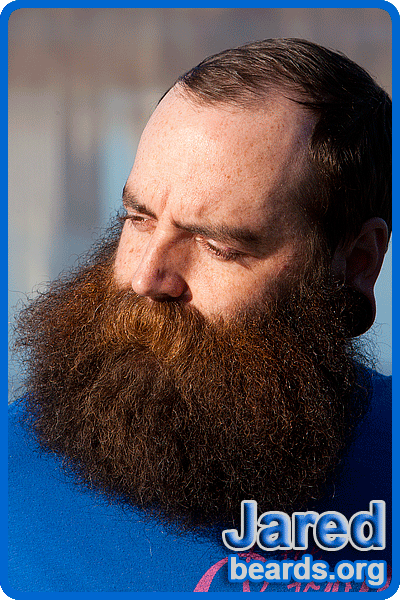 Do you get any criticisms about your beard?

None that I can remember.

Have you ever been pressured to shave off your beard?

At Motorcycle Mechanics Institute there was a rule in the books that said that you beard had to be under four inches. They never said anything to me about it…

I love the color, the thickness, and the shape.

It’s a lot of work! Keeping it clean is no small duty.

With all of the care and grooming requirements as well as all of the reactions that your beard elicits, would you say that you feel your powerful beard is worth it all?

I very rarely see a beard as powerful as mine. It’s totally worth it. This beard has gotten me free beer, sex, wisdom, and power. It’s truly a gift from the gods.

To your knowledge, has your beard inspired anyone else to grow a beard?

I’m sure it has and will again.

Click on the image below to go to Jared’s photo album. 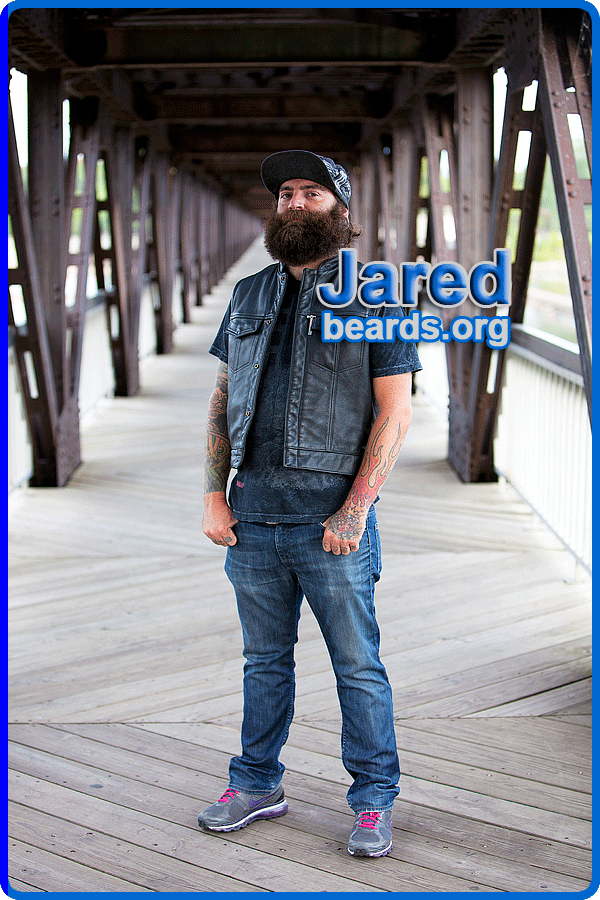