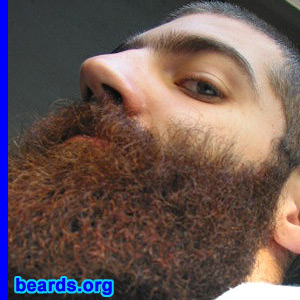 Click on the image above to view Dan’s beard gallery.

Dan sent the following message in email:
“Hey, I’d like to be in the beard success story. If I qualify, here are several pictures of my beard.”

Obviously, Dan qualifies. Read his beard story below and be sure to check out Dan’s photo album. Some of Dan’s beard photos were taken exclusively for all about beards.

I was 16 years old when I found the site. I had a decent beard for a teenager. I did a web search for beards. I was curious about what started serious facial growth at 14. Before that, I was in the 7th grade with black hairs on my chin and an incoming dark mustache fuzz. 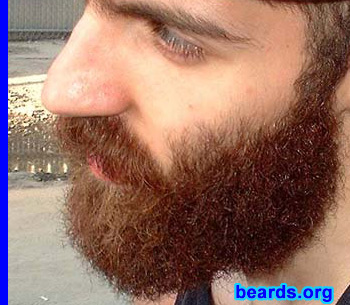 I was already growing one before I knew about the site and always maintained it afterwards.

The grooming, the myths.

My beard is very curly, spirally, wirey. I just get scared when I brush it and see a lump of murdered hairs. So I brush once a week or less. There is no conditioner I’ve found that can tame my beard. Giving my beard a style is something I rarely have done. I would just hate to have to shave everything if I made an error. I’m too busy trying to impress people with this bush on my face to experiment. Besides, a full beard, like they say here in New York, is “The bomb!”

No. I wanted to see how far can I grow this. And I found myself attractive with it. And whatever pictures I saw on the site made me wonder if I could get to that size.

Automatically, instinctively, home grown full to the cheeks. Scissors are strangers to these follicles.

It’s an ego trip. I loved being the only person in high school and in college with a beard. The only problem was that the mustache growth wasn’t as mature back then. In New York City, few 16-20 year-olds have full beards. So I loved standing out, just for the attention. I like looking in the mirror and being satisfied, even if it’s short. I don’t care if people think that I’m Jewish, Muslim, or even Amish. I’ve actually been asked, “Are you Amish?” What I really like is when the wind blows hard and I feel it on the beard. It’s a great feeling, especially when it’s winter and the beard gets frozen.
Good feeling. It also keeps my face warm. Yeah, it really does! I love swimming in water with it and jumping out, feeling the water drip off of it and feeling the weight of the water inside the beard. I like being in the woods with it. It makes me feel I’m part of the scenario. I love touching it and playing with it because i can’t grow long hair on my head. I love it when kids want to play with it. 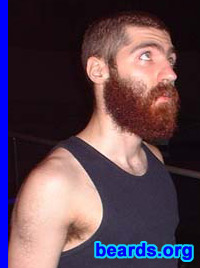 This I hate. I don’t like waiting around for my beard to grow, especially when it’s growing to new lengths. I also hate trying to control it, trying to get it to go where i want it to be. It’s a barb wire monster. I wake up and one side of my face is flatter than the other. I get dandruff and skin problems if I don’t brush or shower enough.

How have other people reacted to your beard? How do you feel
about their reactions?

The variations of reactions are crazy. I think I should make a list:

Responses to the beard from my family are all negative. No one at all in my family appreciates, it except for my grandmother…maybe. She says that I look like an artist. Lovely compliment.

A common response to my beard from people in public is staring. I get a lot of staring. The beard seems to intimidate people. If I go up to talk to them, they back up or brace themselves, except for those who find me attractive and compliment me.