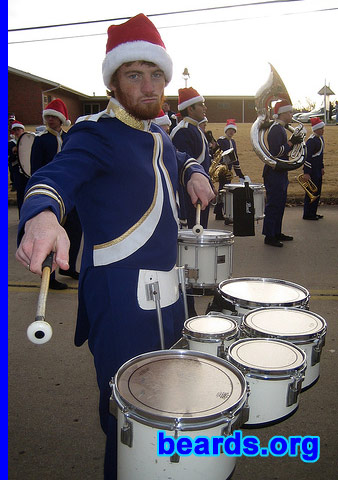 Ken shares the first young beard success story on all about beards. Although he is still just a teen, his dedication to the bearded cause is strong.

Photos are courtesy of Ken and are used with permission. All photos are subject to the site’s conditions of use. Click on the photo to go to Ken’s photo album.

I think I just straight-up “Googled” it.

The site didn’t really influence my decision to grow a beard because I already had one; but it did encourage me to be proud of the beard I had and to avoid the inital temptation to get rid of it.

The info was quite helpful. It really helped me see how beards aren’t just the hair on our faces, but some kind of a connection back to the identity of man.

Somewhat. I’ll have to admit that I’m not a very avid groomer, but I think it is nice for a beard’s growth throughout the face to be evenly distributed in order to maintain a strong shape and color.

With today’s society and being a younger single guy, it can be tempting to want to be more attractive to a broader assortment of women. I don’t have that temptation anymore for couple of different reasons. The first reason is obvious; it’s just who I am. It ties into my religious beliefs of man staying true to the way he was created. Another reason is just sheer convenience. I mean, some guys cannot part from putting a blade to their face for more than few days. I didn’t put a blade to my face for 7 and a half months!

That’s the way it came out of my face when I stopped cutting it off, basically. One inital reason I decided to have a full beard is because when I’m doing very delicate, tedious work with my hands (i.e. shaving), I have moderate tremors. I was pretty tired of cutting myself to pieces or ripping out hairs with a trimmer. A beard just made sense, just as it always should.

I couldn’t imagine not being a full-bearded man. It’s just been incorporated into who I am.

Not really. I’m pretty impatient about things like that. A few years back, I was always flipping back and forth between being clean-shaven and having a beard. Every time I would shave my beard off, I would just look at my naked face in the mirror and just think to myself, “Now, why the hell did I just do that? Man…I had forgotten how small my chin is…” Ha-ha.

Again, being a young single guy, it’s tempting to want to shave your beard after any attractive female gives you any type of negative feedback about it. Well, it took me a while to realize how only short-sighted, material-minded “girls” would hold a beard against a guy. So, basically, my beard is an airhead filter because they are prejudiced against it. I’ve got news for all guys out there; there are gorgeous women out there who like beards. Not only that…they’re usually a bit brighter as well. Actually, beards are slowly making a comeback with the whole new “manly-man” era. You hear that? THE BEARD IS COMING BACK! We’re just ahead of the curve, fellas. I feel blessed to have an employer who does not see facial hair to be any problem. When I applied for the job, I had not trimmed my beard at all in six months. In fact, every guy in the shop I work in has some form of facial hair.

To all those thinking about growing a beard, don’t think “why should I grow a beard?” but rather “why should I shave?” No guy likes to shave.

BEARD POWER. Peace and blessings, everybody.