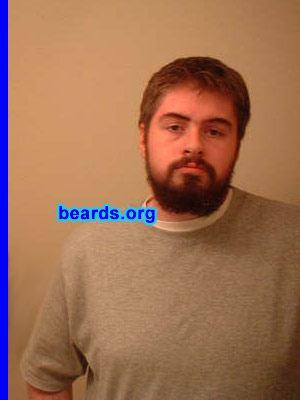 Kyle has gotten an early start on living the bearded life. He is one of the youngest beard success stories here at all about beards. Kyle is full of enthusiasm for being bearded and eagerly shares his beard success story.

Photos are courtesy of Kyle and are used with permission.
All photos are subject to the site’s conditions of use. Click on the photo to go to Kyle’s photo album.

Oh man, it was a while back when I first discovered the site… I must have been thirteen, right around the time when my ‘stache started to come in. I’ve always really been inspired by the other success stories and I had always wanted my own on here. Not to mention, these success stories were always fun to read, especially before I had a beard. I had originally done a Google search on “beards” and this was the most informational site I could find.

I pretty much already had my mind set on growing one, although at the time I couldn’t grow the beard I wanted. It seems like my beard filled in all at once. I just didn’t notice it. That was most likely because I was always shaving because I didn’t think my beard had developed enough to grow a decent beard. The success stories were definitely inspirational to me, having an impact on how I would see myself with a beard.

I had always thought that the more I shaved, the thicker and fuller my beard would grow. This is the site that stomped out that myth. It’s pretty unbelievable how many guys still believe that shaving actually contributes to the density of the grain, or any other aspect of the beard for that matter. I was also getting pretty bad razor burn when I was younger because I didn’t know how to shave properly. My dad always told me to “shave with the grain,” but it took some getting used to before I got comfortable with my own style of shaving. My beard grows in four main directions. From the cheeks, my beard grows downwards towards my shoulders. From the left and right sides of my neck, my beard starts to grow upward, in the direction of my ears. On my chin it grows down pretty straight, but very dense. I’ve got pretty sensitive skin, so shaving my chin and then immediately changing directions to shave toward my ears… It took getting used to.

It was really helpful. My beard is pretty smooth, soft, and bouncy right out of the shower after using conditioner. It was definitely a trip to start using shampoo on my face as well as my head.

I’ve got to be honest, yes. A seventeen year-old with a full beard isn’t a very typical sight. I’ve always looked a lot older than I actually am. Without the beard, I’ve been told I look closer to twenty. But the beard easily adds ten years. When I was sixteen with a full beard, I’d get a lot of clerks and employees in stores calling me sir. When I was applying for a job at a local supermarket one day, I was offered a job more specifically in the alcohol aisle. Twenty-one is the legal age in this state to handle alcohol or work with it. Being only sixteen at the time, but
looking closer to twenty-six, no one ever gave a second thought to my age. It was really upsetting sometimes. All my friends reacted differently to me, it felt like I was somewhat intimidating to everyone else my age. So, I was tempted many times to shave it off and return to feeling closer to my age.

Well, I’ve always been a big fan of the William Riker look, as well as guys like Kevin Smith (aka Silent Bob). So I added some length, found a look that works for me, and made it my own. Recently, I’ve been inspired by King Leonidas from 300 as well. Every now and then I’ll do some trimming and change up the look a little bit. Simply by brushing in different directions, I’ll get different results.

Just about every aspect and feature of being fully bearded is rewarding. There’s nothing better than being outside on a windy day with a bit of a chill and feeling a gust of the wind move through my beard. Also, stepping out of the shower and feeling the weight of the beard at my chin… Being bearded is truly awesome. It’s one experience I wouldn’t trade for the world. The only really negative thing about being bearded is my age. It puts a completely different perspective on myself from others. Most guys my age wouldn’t mind being classified as an adult, being considered more mature and wise. However, it feels very foreign and strange to be so separated from your own age group. The good definitely outweighs the bad, though.

There’s a two-week mark where my face begins to get ridiculously itchy. It lasts for a week or two and then it goes away. The itchiness took some getting used to. I’m a patient guy, so I can wait around for a long time and enjoy the process. Watching my beard go through the different stages is something I like to see.

There’s always a whole lot of good and bad. The key is focusing only on the good comments and disregarding anything negative. I’ve had a lot of girls ask to touch it and feel how bouncy it is. I won’t forget a really nice comment I got from a girl in class who told me I looked mature and sophisticated with a beard, not to mention attractive. I feel extremely fortunate to be dating a girl who loves beards. I think she’d murder me if I ever shaved it off. Ha ha. It’s always cool to get comments like that from the females that appreciate beards. There are going to be countless women who conform to the boring, plain appearance of every other guy with a smooth, bare, shameful face. Yes, I said shameful. It’s a pity so many guys out there can probably grow some fantastic beards, but just won’t. I’ve had tons of questions asked about my beard, mostly from friends who still haven’t picked up a razor yet. Most of the time they’ll ask, “How long did it take to grow?” or “How often did you have to shave?” This one makes me laugh because I know shaving has no contribution to the growth of my beard.

About my age… Most people never really guess my age correctly in the first place, so it’s never brought to attention. I had assumed most people would suppose I’m around thirty or so and wouldn’t ask questions. The real kicker is when I tell them my age. Ha ha ha. I usually get a lot of blank faces and slack-jawed expressions. I’ve had to show my driver’s license multiple times to prove I’m not trying to get discounts.

Absolutely. A better question to ask rather than “Why grow a beard?” is “Why not grow a beard?” It’s just as natural as the hair on our heads. In my opinion, a man without a beard is like a lion without his mane. It just isn’t right.