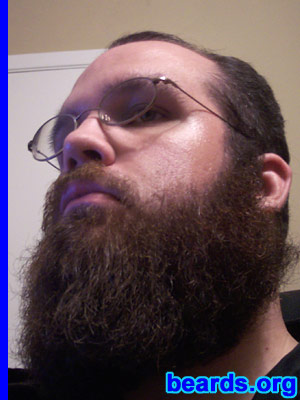 Shaun emailed: “Interested in any success stories in beard growth? I’ve been perusing this website for the last year or so and I thought it might be fun to explore the possibility of posting my own beard on the site.” While Shaun’s earlier experiences in growing a beard are not credited to inspiration from the all about beards site, Shaun does acknowledge that the site has encouraged and inspired his dedication to growing a beard. Here is Shaun’s beard success story.

Photos are courtesy of Shaun and are used with permission.
All photos are subject to the site’s conditions of use. Click on the photo to go to Shaun’s photo album.

To be honest, I stumbled upon it while randomly searching for different types of beard styles. I have a perverse enjoyment playing with my beard and thought it would be fun to show up to work with a Longhorn mustache and mutton chop sideburns.

It did not influence so much as it encouraged the continued growth of the full beard. I’ve been bearded in one way or another, aside from a short year as a Burger King cook, since the tender age of eleven. At the time I discovered this site, I was already growing a summer beard for a hiking trip planned in the Colorado wilderness. Attempting to bring out my inner Grizzly Adams, I guess?

Well, I took some of the tips to heart and grew one during a vacation now didn’t I?

The art of grooming is bit beyond me at this point, hence why I’m growing a full beard. But quite a bit of the information, such as never trimming a wet beard and actually washing / conditioning a beard were incredibly useful. I’ve heard that male pattern baldness is a maternal gene, so I must have my mother to thank for my thick and very bushy beard as well. I’m usually forced to shave off my beard after being attacked by electric trimmers. After a very bloody confrontation with my father’s safety razor, I try to keep blades away from the face as much as possible.

I shaved off the initial beard simply because I thought it would be hilarious to update my photo ID with this gigantic thing hanging off my face and shave right after the ID photo was taken. However, I rarely ever stay clean-shaven for any period of time. I’m reminded of a story my dad once told me. Directly after leaving the military, he and few friends went wild and let everything grow long. After updating his driver license he took a look at the photo and decided it wasn’t for him. Perhaps I was inspired? Now that I’m a dedicated beard grower, do I have my doubts? Sure, I have the occasional thought about giving up the life, even the occasional dream pops up where I’m shaving it off but I’m constantly reminded of one thing that keeps it going; I have no chin!

Initially, it was simply by pure laziness. Now I’ve come to enjoy not having to bother with a razor and soap when I wake up in the morning. Likewise, I never particularly enjoyed shaving simply because toilet paper doesn’t make a very good sponge when you are bleeding everywhere. My original discovery of facial hair was limited to my father’s mustache, so I can’t say he exactly inspired me to choose this style (though it could be happening the other way around as he’s currently growing a goatee). So I choose to say this: it came to me.

I get a giddy feeling every time I get a compliment, even marginal ones at that. So I must enjoy some aspect of it. I enjoy playing with my beard including petting /stroking, twisting and even pulling. It is an interesting experience to feel the wind on my face, be it salty sea air or dusty. Whenever the wind blows, I feel this massive movement on my face. On the positive side, I don’t chew my fingernails as much as I’ve got this thing on my face to play with.

I was warned of the first month’s itchiness and I think my face has become accustomed to having hair on it, but that aspect of it has never been fondly remembered. Having had facial hair of one sort or another for most of my life makes being naked all the more painful as I despise the overall rawness I experience after being freshly shaved and waiting around for that first growth becomes what amounts to a very stressful time.

The amusing nicknames aside, only fellow bearded men have given me any real compliments though the occasional spark of jealousy does come through time and again from those who can’t grow a
beard. I’m not above personal critiques, however, as the occasional dream has shown, so negative comments do affect me. My brother’s no help as he pointed out the genetic disposition of our family’s beard growth; the mustache does not connect fully. Hence, my beard is not perfect, though I’m very proud of its potential. Probably the most pleasing comments have come from both friends and the occasionally stranger . . . such as a Scarborough Faire actor.
Dressed in dandy medieval clothing, the man walked up to me, bowed theatrically, and said that he really admired my beard. A friend made the simple, but ego-riding comment: “I’m digging the
beard, dude, it’s very manly!” What could be better than that?