Simon sends along his beard success story from the Netherlands with great enthusiasm! 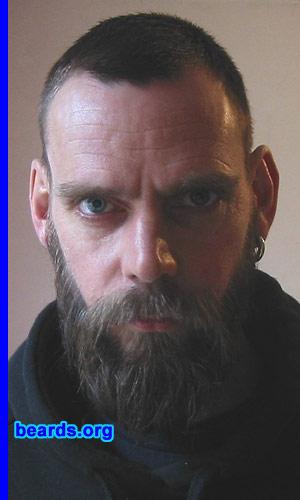 Photos are courtesy of Simon and are used with permission.All photos are subject to the site’s conditions of use. Click on the photo to go to Simon’s photo album.

I did a Google search on beards. That’s how I found the site. Though I had been bearded with a six-days-shadow since 1996, all about beards gave me the push to let it go and grow! The site, with all the photos of many great beards,brought me loads of inspiration.

Giving up? No! I think I look like a ready-to-cook-chicken when I’m shaved. But each length has its own difficult period. Is the beard still too short when you’re driven insane by itch? If it grows longer, you have to deal with curls and waves jumping all directions except the one you have chosen, like me at the moment: in the morning the beard needs the help from a round brush and a hair dryer. Other days, I’m walking around looking like a worn-out chair with one metal spring popping out. But these periods never last long. And it helps to think about the next length and to find tricks and solutions that solve the problems. Of course, the all about beards site is of great help, too. Maybe you can make a special Bad-Beard-Day section, where we can upload pictures from moments when the beard is less perfect — a kind of beard-bloopers.

It came by itself. That’s to say, after 1.5 months, I trimmed it short in the neck and kept it as long as possible on the chin. So it became an inclined line. Two months later, a friend, a hairdresser, did cut the beard again. I had to let him do the job because I couldn’t see anymore where to cut. Now it automatically grows in the right shape. Perhaps within a half year, I will re-shape it and make it even more inclined. Who knows? I’ll see.

It does not only feel like I re-invented a brand new me, but also like it’s the final completion of myself. It’s like I discovered a long-hidden part of my body — the B-spot!? I don’t know what it is doing there but it’s doing something! I’m more handsome, happier, and proud. I feel more complete. Perhaps the key to all this is warmth. I don’t mean the nice effort of a beard keeping your face warm during cold winters but more a social and biological warmth. After all, the man with a beard is the symbol of the father figure — “Calm down. Everything is going to be fine” — and the leader — “I know the way. Follow me!” — and the caveman, too — with his beard, he puts nature far above culture (shaving). Maybe some of all that is glittering on me when I glimpse in the mirror. I’m amazed about how many people do believe that full-bearded men are hiding something. Meanwhile, I would say it’s more like the opposite: men who shave do hide something. They hide something — out of sight. It might sound a bit paradoxical, but the longer the beard, the more naked you are. After all, the beard is undoubtedly a sign of manhood, wildness, freedom, and…sexuality! Not having secrets, like the shameless nudist, is the luckiest way of being! The beard makes me a lucky man. There’s nothing left to hide. Etymologically, the word beard seems to come from barbarian. Somehow, I like that idea. 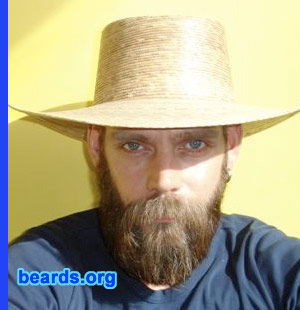 For ten years, I kept my beard to a length of six days’ growth. So I’m used having a beard. I do enjoy the growing process! A beard grows incredibly slowly and you need a lot of patience. That’s a challenge. I’m very curious as to where it stops. I wonder about the “right” length. Time will tell. There is an old man living in my neighborhood with a long, white beard. Will I end up like him? The hair on my skull has to stay really short; only one thing can be long — the beard, otherwise I feel out of balance. I have to shampoo my beard every day to feel clean. Now and then I trim my mustache, though I would like to have it much longer. But I like the foam of the cappuccinos that I like to drink and the yogurt I eat in the morning that sticks to the moustache. When I have a dinner with friends, I have to ask them to tell me when a piece of food stays in the hair above my upper lip. And I’m keener on napkins these days. Very interesting is to see all the colors my beard holds: brown, dark-blonde, blonde, copper, red, grey… Only black is missing. My beard, I started to grow it in the autumn, is six months long. It’s almost summer. I think it will be light blonde when the summer is over, like my hair.

In the beginning, people asked me over and over again if I became a Muslim…in the supermarket, at the gym, in a bar, on the street, everywhere! And it was driving me nuts. Growing a beard is a good protest against the confiscation of facial hair: beards should be free! I also heard the meaningless “Gee. You have a beard” quite often. I usually replied with a simple, “Yes”. What are they trying to tell me when saying that? Children seem to see me as a kind of fairytale figure and sometimes they grip the beard as if it were made out of candy. It’s very direct, but I like it. Women do give much more compliments than men. They also ask more often if they may “touch” the beard and are astonished that it is so soft, and they can hardly stop petting it. Maybe men are less enthusiastic because they can grow one themselves — the thing women can’t do. Bearded men are walking manifests and that can be very confrontational to shaved men, who may have to follow the instructions of their wives or bosses. Shaved men sometimes respond in a mean way, saying nasty things about our beards. The following quote from Diogenes, the Greek philosopher with the long beard, will do: “Do you somehow blame nature, being born to this world as a man and not as a woman?” Recently, my beard gains more respect. Respect grows with the length of the beard. Lately a guy said, “That’s fun, a beard like that. I heard it will become fashionable again to have one.” Actually I don’t care and I’d better not: if you don’t become fashionable, you won’t become outdated as well!

Click on a photo to go to Simon’s photo album: 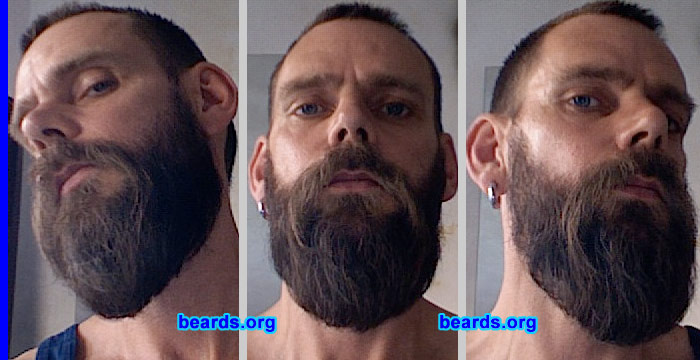