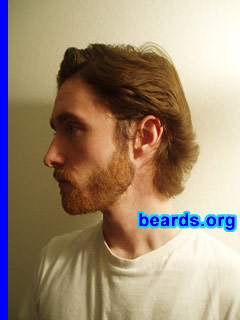 “Excellent Site, Very Inspiring” was the subject of the first email Stewart sent in to all about beards. It is always a pleasure to receive this type of praise. It’s even better when it’s associated with another all about beards success story. Stewart has kindly offered to share his story on all about beards.

Photos are courtesy of Stewart and are used with permission. All photos are subject to the site’s conditions of use. Click on the photo to go to Stewart’s photo album.

About three years ago, I tapped “beard” into Google and it came up with the site. I was thinking about growing one, and wondered whether there were any sites dedicated to that sort of thing. I was very surprised to find this!

It made me aware that there were other people of my age out there who dared to grow one! I was twenty-two at the time and, apart from several aborted attempts to grow one (including one that I dyed when I was twenty and didn’t have much facial hair!), I had remained clean shaven despite the fact that shaving irritated my skin. I’m British, and beards are almost non-existent in England, especially on young men. The site definitely helped me to think about growing one again, and it took a couple more months before I actually started. I kept that particular beard for about six months, then went smooth for nearly three years, apart from a few attempts here and there.

Very useful. It was helpful to read that one should wait four weeks before doing anything with it. With all my previous attempts, I’d shaved a neckline after a week or so, and then given up on the whole thing a day or so later, thinking it didn’t look right. Well, of course it didn’t look right — I hadn’t given it enough time!

Yes, because I didn’t have a clue about how to care for a beard, apart from guessing it might involve scissors and a comb. The idea of shampooing it seemed ridiculous, but of course, a beard is made up of hair — so why didn’t I consider that? I was thinking a quick rub with some soap would suffice.

I had many thoughts of giving it up — in fact, I still think about shaving, even with my latest beard, but my wife loves it and encourages me to keep it. In a fit of pique a few days before Christmas, I used the trimmer with the guard on No.1 — it went down to stubble, and I felt bare. I immediately regretted it, and it took a couple of weeks or so before I felt that I looked right again.

One of the main reasons I thought of giving up was because my beard is largely red, whereas my head hair is dark brown. Every previous attempt had met with disgust or puzzlement from friends, colleagues and even strangers: “Why the hell are you growing a beard?”, “Beards are disgusting!” If not on the receiving end of complete ridicule, I would get backhanded compliments from people when I would shave again — little things such as, “Thank Christ for that — you look much better without it! Please don’t grow it back!”

The site definitely helped me to maintain my latest effort, which came about after I had grown a pair of Victorian sideburns for a Halloween party. I came across Michael’s story, and that really helped. That guy has kept a beard for thirty-odd years, which takes a lot of dedication — especially with people’s attitudes towards beards being so negative. He seems like a stylish bloke, as well.

For a start, I have better growth — denser and darker — on my sides and neck than I do on my top lip and chin. If I had a goatee, it would be largely blonde and ginger.

Secondly, I don’t really like goatee beards. Once a mark of brilliance, sported by gentlemen, they became very popular amongst young men in the nineties, doubtless due to Hollywood. As the sort of guy who considers beards to be distinguished, I didn’t fancy sporting the same style of facial hair that I associate with punks who are lacking in good taste. I think very few people can get away with having a goatee — a lot of them look terrible. Johnny Depp can carry one off, but he’s just about the only famous person I can think of who looks all right with one. The goatees on your site are very good, though — if those chaps care enough about their beards to visit the site, then they’re obviously going to invest a bit of effort in growing and maintaining it!

It’s a bit like being a member of an exclusive club. It feels great from that point of view — a minority of people going against the grain! On a functional level, it’s great for keeping your face warm. I also enjoy trimming it, which I do once a week. Oh, and the lack of irritation, dry skin and ingrowing hairs is fantastic — I dealt with all that rubbish for years and it’s very
liberating, no longer having to scratch my face several hundred times a day.

Yes, once the irritation of the first few days had gone. It’s great to look back at the photos of my progress, as well. I don’t even look as if I’m the same person as I was when I shaved. I see a young lad in the photos from October, but a proper man in the ones from January.

My wife loves it. Other people have commented favorably, as well. If I were in England, I think most people would react negatively — beards are unacceptable there! Basically, I couldn’t give a damn about people’s negative perceptions of beards, because I’m at the stage in my life where such things simply don’t matter any more. My wife’s opinion is more than enough for me.

As for the future, I don’t know. If my chin and mustache growth improves, I might consider a Van Dyck, but that would mean I would have to irritate my cheeks with a blade every day or so.

I probably would consider going clean shaven again in a few years, because I like to change my image every now and again. It would be nice to look back at a load of photos when I’m an old man and see all the different styles I’ve gone through.