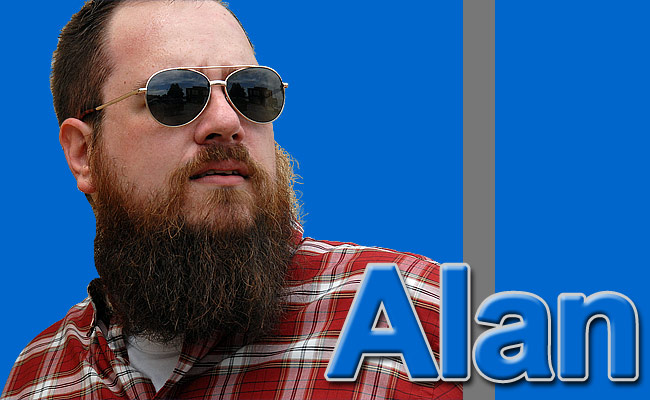 all about beards is pleased to present Alan’s beard success story. Alan has been a big fan of the site for many years. A goal of his has been to grow an impressive beard and appear on all about beards. Thanks, Alan, for your enthusiasm for the site. We are happy to have you here! 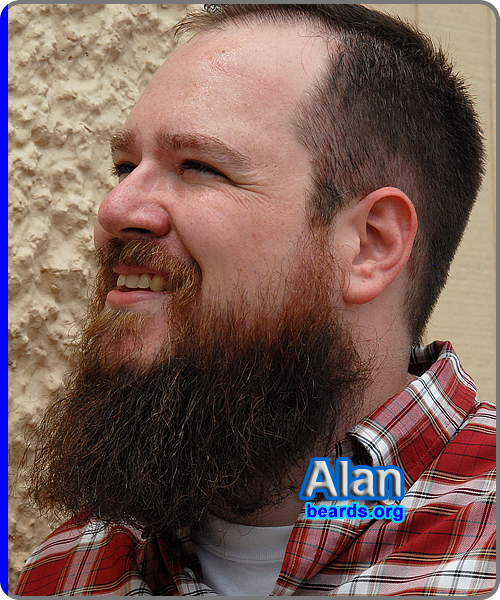 My name is Alan and I am a husband and father of three. I live in Missouri, where I am a freelance graphic artist. I’ve been growing, or at least trying to grow, a beard for eleven years. I looked like I had scurvy the first few times I grew a beard. I have no idea how my wife, whom I was just dating at the time, put up with it. Recently, I looked at some pictures from our first date and saw that I had a very sickly chin strap beard.

My first attempt at a “yeard” (a “year beard”, a full year’s growth) was pretty haggard, too. I kind of don’t blame my district manager at the time for making me shave it. I even posted the shaving video on YouTube. Now however, I work as a freelance graphic artist with another of my closest friends. So I can grow ’til my heart’s content. It will be a full year of beard growth on September 26, 2011.

Scroll down to read Alan’s beard success story. Then, be sure to visit
Alan’s photo album.

The photos on this page and in Alan’s photo album were provided by Alan and are used with permission. All photos are subject to the site’s conditions of use.

How did you find the web site all about beards?

I found the site while I was the manager of the local theatre back in 2005. I had decided to try and grow a full beard, no shaving for twelve months. I went looking for tips and came across the site. I spent the rest of the day looking at pictures and reading the interviews.

How did the all about beards site influence your decisions related to growing your beard?

Pretty heavily. I live in a town where few if any younger people have a long full beard. So the interviews and pics were inspiring and gave me something to shoot for.

Yes, I really didn’t have anyone to go to with questions. So the site was kind of my guru.

Yes, for pretty much the same reason. No one else I knew even close to my age at the time had anything more than a goatee.

The pics on the site and the interviews kept me pretty motivated.

Absolutely! I love growing a beard.

Two reasons: First, because I knew no one my age that had one. Second, I figured if I’m going to grow a beard, I might as well just stop shaving completely. I hate the trimming and upkeep of other forms of facial hair.

You are letting your full beard grow for a full year…a “yeard”. What prompted you to go for this?

I saw a few videos on YouTube and a couple of people on all about beards that had grown one and I thought setting a goal like that would keep me motivated. Plus, I knew certain members of my family would hate it and I figured I could tell them that it’s “just for a year” and they would leave me alone about it.

At the end of the one-year growing period, will you keep the full beard? Would you say that you are a dedicated, permanent beard grower?

Yeah, I know I want good length. So I’m sure at some point I’ll start trimming when it hits about where I want it. I don’t see myself ever being clean shaven again. 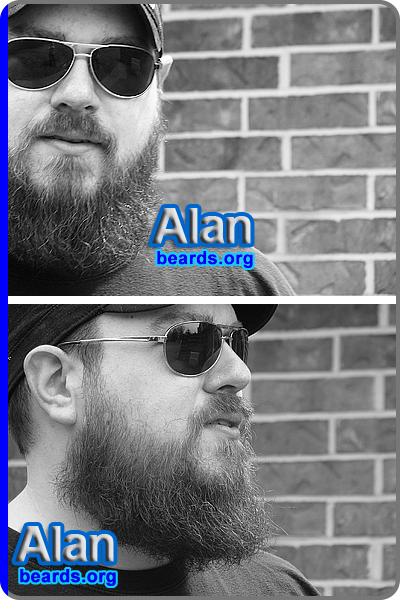 What does having a full beard mean to you?

Full beard is a pretty tough decision. After you get past the initial shock your friends have (which is fun), then it’s just you and the beard. It kind of becomes a battle. You fight people’s attitudes. You fight the heat in the summer. But you keep going. So I guess to me a full beard is about will and commitment. It will sound silly to people who haven’t done it, but going a year without shaving is really tough. Most people think it’s simple ’cause you just stop shaving and it’s so much more than that.

My mom hates it. My wife is cool with it. My kids and friends think it’s pretty sweet. None of them has gone for a “yeard” (“year beard”). So it’s kind of cool. I like it when strangers like my beard. I went to a fast food restaurant one time and I had shaved down. The girl behind the counter stopped and asked me if I worked at the theatre and I said yes. She asked me if I used to have a big beard. I replied that I did but my district manager made me shave. Then she said, “Too bad. That beard was epic!” That made me feel like a goon for giving in and shaving. I started growing again the next day.

Definitely. It’s fun to see if you have the will to grow a beard. There are times when it’s not going to look good at all or you are going somewhere where it will make you stick out like a sore thumb. Those were the times when you either play or fold. Trevin, one of my closest friends, once said, “Go Beard or Go Home.” That’s kind of the way I look at it now.

Has your beard influenced others to grow their beards?

Yeah, I’ve inspired several beard-growing contests among friends. It’s never for too long, but it’s fun. They usually last only a month or two, tops.

How do you feel about sharing your beard success story on beards.org?

I’m pretty stoked. I’ve been a fan of the site. So to be on it is really cool to me.

Still love the site. I still check for updates all the time and point friends to it.

What made you an avid fan of beards.org?

The interviews, are my favorite part. That’s what brings me back, learning about other people’s experiences.

Click on the image below to go to Alan’s photo album. 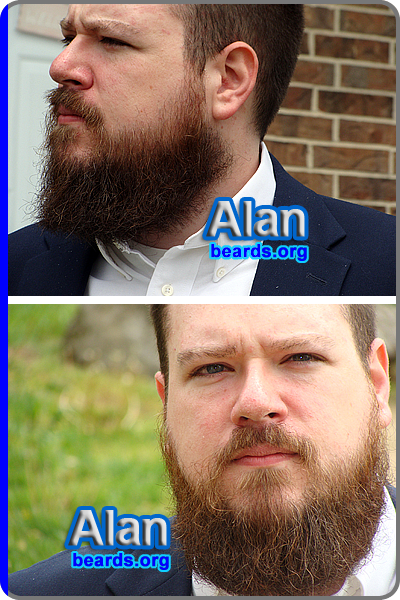