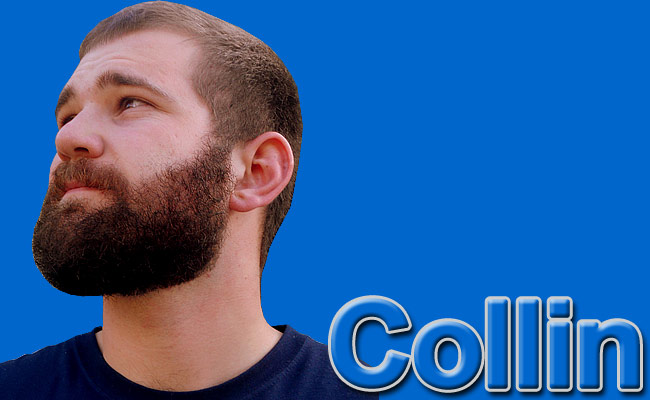 all about beards is proud to welcome Collin to our beard success stories! Collin is exceptionally enthusiastic about and dedicated to growing and proudly showing his young full beard.

Collin is a college senior majoring in finance and economics. He has golfed competitively from the age of nine. And Collin played four years of basketball in high school. He is an avid sports fan and considers that to be his major hobby. Collin says that he also loves to listen to music and cook. He is a huge Food Network fan which, along with sports and news, makes up most of the television he watches.

Collin is a huge college football fan and a die-hard Boise State Broncos fan. He has even temporarily dyed his beard — one side blue and one side orange — for a Boise State football game.

Scroll down to read Collin’s beard success story. Then, be sure to visit Collin’s photo album.

The photos on this page and in Collin’s photo album were provided by Collin and are used with permission. All photos are subject to the site’s conditions of use.

How did you find the web site all about beards?

When I was a freshman in college, I started to consider growing out a full beard. I had been able to grow facial hair since I was fourteen or so, but I only ever let it grow out on my chin. I figured I would Google some information on beards to get an idea of what to do and I just typed “Beards” into my search engine. all about beards was the first link that popped up and the only one I ever actually looked at.

How did the all about beards site influence your decisions related to growing your beard?

What I liked about the site was the amount of pictures of beards that it had. Some of the things that I was always worried about were how to cut the neckline, how to wear a full beard, and whether or not it was professional to have a full beard. The pictures on beards.org allowed me to see that many people have full beards and that, if they’re cut right and maintained, they can be extremely professional. I also read through the areas about defining the neckline and maintaining the beard which allowed me to groom mine correctly.

Definitely! It broke down the different methods and styles in a way that anyone can understand. I was eighteen at the time and I was able to understand the concepts of growing a beard without ever really having one.

It was just as helpful with grooming tips as it was with tips about the growing process. It also helps that you can read about how to do it and then look at pictures to see how it’s supposed to look.

Having a beard really grew on me (pun intended). Everyone goes through the stages of growing where they just look scruffy and unkempt, however, for me, those stages were short lived. There were times where I would trim it down shorter or shave it off completely just because I had the beard for a while. But I’ve always grown it back out right away. Oftentimes I’ll go to the website and look up pictures of beards which tend to inspire me all over again to keep growing mine. At this point I don’t think I’ll ever be without a full beard; at least not for very long.

The growing process has its stages that aren’t very enjoyable. For example, everyone I’ve ever talked to or read about has gone through the itchy stages. However, I just found that it isn’t itchy for long and soon starts to fill in and starts to look good. Other than the occasional itchy or patchy stage, it was an easy process and I really liked how I started to look.

The full beard was just an easy pick for me. I have always liked how it looked and it was the easiest for me to grow and the easiest to maintain. It doesn’t require as much shaving and trimming as other types of facial hair. I also have always admired full beards. So once I realized I could grow one, it was an easy choice.

I love being a full-bearded man! It makes me look and feel older. And I get a lot of compliments on it. My beard has become a part of who I am, a part of my identity.

Have you become a “dedicated, permanent beard grower”? If so, how did you arrive at this decision?

I have indeed. I really don’t think that I’ll ever go without a beard for an extended period of time, unless I have to for some reason. I just have really grown to like how I look with a full beard and have had nothing but positive reception of it. I just don’t see a reason why I would ever want to be without a beard.

As a “dedicated, permanent beard grower”, does this also mean a permanent full beard or do you expect to change styles now and then?

I don’t really have any ambition to try different beard styles. I don’t know for sure what will happen down the road. But for now, I’m content with a full beard and I don’t see that changing in the future.

What have your parents thought about your full beard?

My parents have always thought that my ability to grow my beard was pretty cool. My dad had a full beard throughout his life, mainly in the 1980s. So I think that I got my beard from him. My mom says that she doesn’t necessarily like beards (in reference to my dad’s) but she says that she thinks mine “looks nice and is awesome.” I have two brothers, one older and one younger, and neither of them can really grow a full beard. So I think that my dad has always appreciated the fact that I can.

What did your parents think of your earlier beards?

My parents have been supportive of me while growing beards throughout my life. I actually always kept a small beard on my chin in high school, but never grew it out past that. Ever since I started growing out a full beard, my parents have expressed that they think it looks good and that it’s funny how well I could grow one out. I used to shape my beard in funny ways for an annual turtle neck and Christmas sweater party, and my parents both have always laughed at what I would do with it.

What made you want to share your beard success story?

I’m very proud of my beard and of my ability to grow facial hair. I’m glad that I made the decision to grow my beard out and I hope that others will be able to read this and decide to do the same.

What does having a full beard mean to you?

To me, having a full beard means maturity and self confidence. It is something natural and it creates individualism. I love my beard and how I look with it.

I love the site and I’m honored to be featured on it. It’s a great support system for those who are indecisive about growing facial hair and it provides great information for those who have decided to do so. I really like how it allows for people to upload their pictures. This provides people who don’t know what kind of facial hair they want with a way to see different styles.

Click on the image below to go to Collin’s photo album.