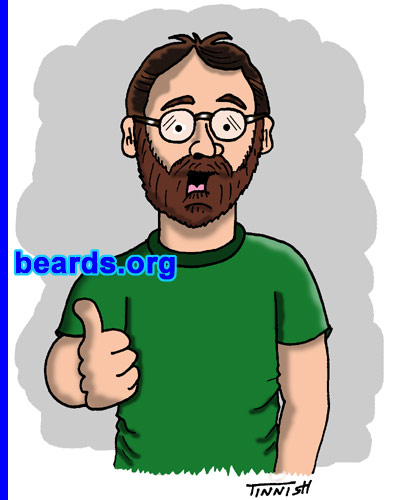 Troy Tinnish generously provided the set of custom beard illustrations for the all about beards beard style guide. His drawings make an outstanding enhancement to the site.

Troy Tinnish is primarily a cartoonist, but he also dabbles in pencil sketching. Troy lives in the province of Saskatchewan, Canada and has been drawing for as long as he can remember. A self-taught artist, Troy has had no formal training. He learned everything from books and on the Internet. Cartoonists that he admires and uses as inspiration are Bill Amend (Foxtrot), Jerry Scott and Jim Borgman (Zits), Jim Toomey (Sherman’s Lagoon) and Bruce Blitz. Troy says that his drawing style is very simple, tight and crisp, much like that of the artists he admires. Troy has put some of his cartoons on t-shirts and other products. You can check them out at http://www.cafepress.com/frankswisdom (an external site with no affiliation with beards.org).

Bearded since 2001, Troy is a dedicated, permanent beard grower. Troy says that he grew his beard because he just got tired of having to shave every day. So one day, he stopped shaving and has had a beard ever since. Troy has changed the style of his beard a few times and has gone to a goatee and mustache twice, but has never been clean shaven in seven years. Troy comments that he loves his beard, that it fills in very nicely, and has a very straight, natural cheek line. About his beard, Troy says that he has no complaints.

Return to the beard style guide.