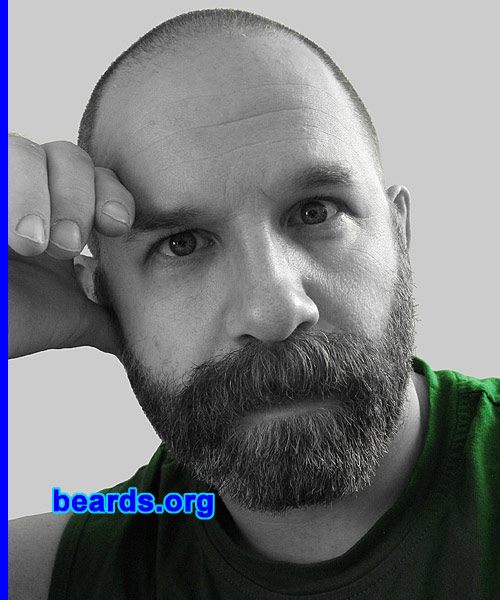 In many ways, Steven defines “beard” here at beards.org. A bearded adventurer, he symbolizes the rugged individual who grows a beard. Steven has generously supplied numerous photos of his beard for the site. Many more will be added in ongoing updates to this beard feature. Steven’s photos have been taken exclusively for all about beards. Photos are courtesy of Steven and are used with permission. All photos are subject to the site’s conditions of use.

Be sure to visit Steven’s photo album. You may also:

Scroll down this page to read the story of Steven’s beard.

what is it about beards?

I have actually spoken to some bearded men who look down on men who are not bearded. I don’t judge people on their ability to grow a beard or not. It is just not in some guys’ genes. A beard can enhance a person, but ultimately a personality is what makes a person nice or not.

Why did you grow your current beard?

My current full beard started as a form of rebellion. My ex preferred a goatee to a beard. When we broke up, I decided to grow the full beard out of spite and to make a fresh start.

When I was young, a beard just didn’t seem like an option. I am plagued with hair all over, so my facial hair grew quickly, even back in high school. All I remember was that I hated shaving. My skin is very sensitive and I had constant, nasty, razor burn for years.

The only family member with any facial hair was an uncle of mine, whom I only saw once a year. His was red and brown. Over the years, I watched it go ever more gray. He was a pretty cool uncle.

What motivated you to grow your beard for the first time? How old were you at the time?

I grew my first beard when I was seventeen and living as an exchange student. My host family thought it would be cool if I stopped shaving, so I did. My beard did not grow in as thickly back then, but I liked it because everyone else liked it. When I got back to the United States, I was one of only two guys in my senior class that had a beard. The other guy’s was thicker than mine.

The style of beard I had the first few times was trimmed down quite a bit and rode right along my chin-line. I guess that style was good when I was about age twenty or so, but I prefer the full beard style now that I am older.

I have had several goatees over the years. I love the look of a goatee, but they can be difficult to maintain. I never had both sides matching. In college, I shaved a goatee down until it was just a mustache. I had way too much hair on my head back then, and the combined look totally ruined my older sister’s wedding photos. I don’t think she has forgiven me to this day for that. I also
shaved a goatee down to a Fu Manchu mustache a few years ago. That was a huge mistake. The Fu looked good itself, but I had done it in the summer, so my chin was a lot whiter than the rest of my face because it hadn’t been getting any sun for so long. Tip: Don’t shave off facial hair at the end of summer!

You obviously have an outstanding beard. When did you first realize that your beard was above average?

I am naturally a very shy guy, so I honestly didn’t realize my full beard was above average until after the praise started rolling in from beards.org. That was a great confidence booster. As for the goatee that I sported off and on for years, well, it did make me a bit popular. None of my friends have facial hair, so I really stick out.

How does it feel having such a great beard?

Some days I get frustrated and don’t think my beard is all that great at all. Sometimes I wish my beard were all one color. There is a lot of blonde, gray, and red mixed in with the brown. I can trim it down a bit and have different colors appear more prominent. That is pretty cool. I just know that I am never going to try to dye my facial hair again.

My career is based on caring for other people, so it is not my nature to spend any time “seeing myself” in any particular way. Aside from that, having facial hair, especially the full beard, does make me feel more mature and masculine. And I now feel more comfortable being my age. In addition, I am slowly overcoming my natural shyness. I have no choice; more people come up and talk to me when I have the facial hair. (To be honest, the shaved head plays a large role in that as well.)

My best friends and my family all beg me to shave it off every time I see them, but my coworkers all love it.

When I look at photos of myself with a clean-shaven face, I think that I look silly. The beard is now a part of who I am. I have a job where I must wear a suit. I’m very much in the public’s eye and I deal in part with food, so it is important to me at least that I keep my beard neatly trimmed and under control to present a more professional image. (The whole hippie / grunge / anti-society beard look is not for me.)

Has beards.org had any influence on your growing a full beard?

Without the support of beards.org, this full beard would have been gone months ago because I normally like to change things up from time to time. Now I am very glad that I still have it. The overwhelmingly positive public response to my beard certainly has encouraged me to keep the beard. So many people like this look on me; who am I to disappoint them?!

The friendship I have made since being featured on beards.org is worth a lot to me. That is the greatest part of this entire experience.

How has being prominently featured on beards.org affected you?

It is truly an honor to be featured so prominently. I definitely get a kick out being recognized! That happens at least a few times a week online.

Well, I don’t think that beards are for everyone. I think some guys try to grow a beard to compensate for a weak chin or a double chin. Often the style and shape of beard they choose tends to highlight rather than hide. I would certainly recommend that anyone interested in growing a beard read the tips about styling and shaping found on beards.org. 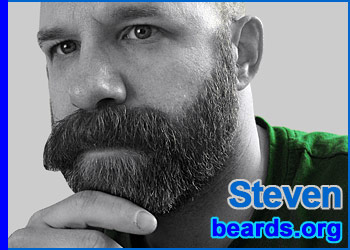 Click on the image above to go to Steven’s photo album.