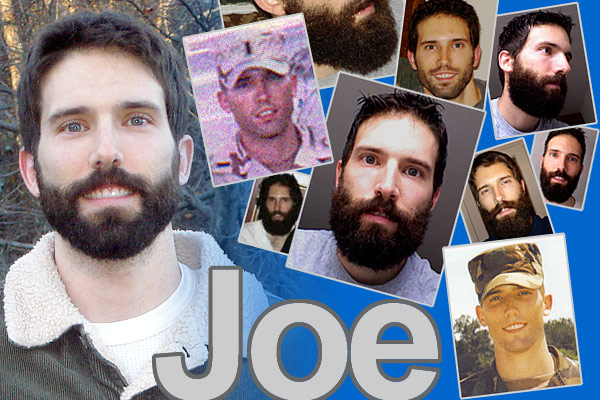 Joe is a great soldier doing his duty to support the bearded cause. all about beards is honored to include the story of Joe’s excellent beard in our featured beards section. Joe’s regular job is at a library. But Joe is also a musician. He plays in a band based in New York state called Happy Balky and the Good Livin’.

Also, be sure to visit Joe’s photo album. 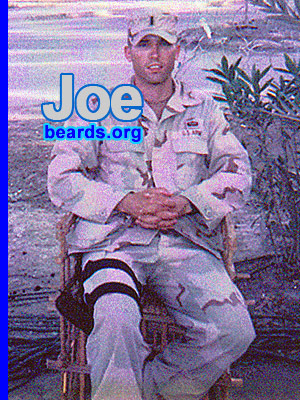 UPDATE: Inexplicably, Joe recently did a shave-down. Unfortunately, the camera did not capture any photos of the state of Joe’s full beard before the clipping began. However, we do have some photos of Joe with mutton chops, a soul patch, and mustache: Joe’s shave-down update. Hmmm… I wonder if the next change will be the triumphant return of the full beard!

The photos on this page and in Joe’s photo album were provided by Joe and are used with permission. All photos are subject to the site’s conditions of use.

I love beards. I admire men who have beards. Back in the nineteenth and early twentieth centuries, bearded men were the norm. Somewhere between then and now, wearing a beard fell out of fashion. Now I do feel that beards are starting to make a comeback. I have been noticing more and more men wearing beards lately, usually older men, but definitely some of the younger generations as well. I want to do my part to contribute to the “beard revolution” and make it acceptable and even fashionable for men to wear beards again.

As best I can recall, my earliest memory of wanting to grow facial hair was when I began high school. I have a “baby face” which makes me look quite young. I’m twenty-nine now and even with the beard I’m lucky to pass for twenty-one. Without the beard, I look eighteen! Anyway, of course when one is young they want to look older for various reasons. I would see all the older kids with facial hair and that contributed to my desire to want a beard. I wanted to look older, not to mention the fact that having a beard looked cool, too. Actually back then I didn’t care what style of facial hair I grew, as long as I could grow it!!

I don’t recall any.

Was it frustrating for you to have to wait for your facial hair to develop so that you could finally grow the beard that you had been wanting since childhood? What was that waiting like for you?

Yes, it was very frustrating. I was a late bloomer so to speak, so I wasn’t even able to grow good facial hair until I was out of high school. I tried growing sideburns, a little goatee, and even a mustache while in high school, but it never came in good or full. At the time I thought anything was better than nothing. But when people would say things like, “you have dirt on your lip or chin” in reference to the inadequate growth of my facial hair, I would get annoyed and slightly embarrassed.

I understand that you joined the Army before you were physically able to grow a beard and that you developed the physical ability to grow a beard while you were in the Army. Given your long-term desire to have a beard, what was it like to have your facial hair develop while being prohibited from growing a beard because of Army regulations? Did you get to try growing a beard for short periods of time while on leave? How did that go for you?

It was frustrating on several levels. As I mentioned before, I have very sensitive skin. So having to shave every single day was very painful for me. Luckily though, I went through the ROTC program. So during my first four years in the Army, I was attending college. Therefore, it wasn’t military 24/7. During school breaks and summers I would grow my beard in. This was an experiment because I had never physically been able to grow facial hair before. At this point I was probably around nineteen or twenty years old. Every time I would have a little break from the military because of a school break, I would try to grow it in. At first I tried a few days, then a week. After about a week I had a good “stubble” beard and people would comment on how quickly my facial hair grew in. The longest I was ever able to go without shaving at this point was four weeks during a winter break. That was when I realized I could grow a pretty decent beard. I was happy with the way it turned out. Unfortunately, because of my military obligation, this was the end of the experimenting because after college, I went on active duty for four years and then I had to shave every day. There was no opportunity to grow the beard for four years.

After you got out of the Army, how much time passed before you started to really grow a beard?

I started growing it the very same day I left the Army. I wasn’t going to waste any time. 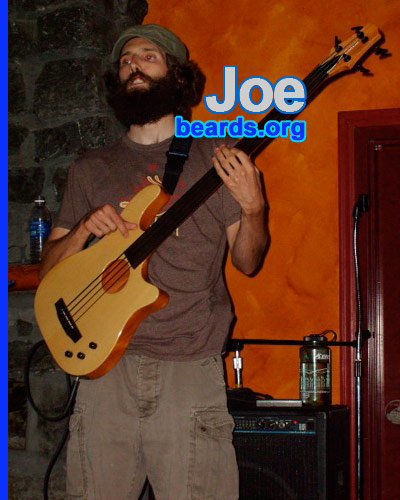 It was great. After I got out of the Army, I moved back home for about four weeks. During that time I was letting my beard grow in. Then I went on an extended vacation for three months in Italy. During this period I was letting my hair and beard grow out. My father came to visit me in Italy towards the end of my trip and I picked him up at the airport. He didn’t even recognize me!!
I actually had to go up to him and say, “Hey dad, it’s me.” It’s amazing how different one can look with long hair and a big bushy beard.

How did you feel about how your after-the-Army beard turned out?

I thought it was good. This was the first time I had ever let it grow for so long. It was much thicker than I expected as well as curly. This is when I learned the importance of using a conditioner on my beard.

I’ve tried many different styles including a goatee, mutton chops, handlebar mustache, and full beard with a variety of different lengths. Nothing ever felt quite right except when I was wearing the full beard. When I would try other styles I would always grow the full beard back rather quickly. I feel the full beard looked the best on me and was easier to maintain.

Not only have you grown a full beard, but a substantial full beard. That must have taken some courage. What’s the story?

To be honest, I think laziness has a lot to do with it. I prefer to just let it grow and not have to mess around with neck lines or cheek lines or trying to trim it. The only thing I will trim occasionally is my mustache because it gets in my mouth. I’m also apprehensive trimming my own beard because I’m afraid I will mess it up. Whenever I get my hair cut I usually get my beard trimmed as well. Right now I prefer to keep my beard full in the center and tapered on the sides as opposed to letting it get big and bushy all over. But usually trims are few and far between so it ends up getting big and bushy anyway.

I wouldn’t have it any other way.

That’s an interesting question. I would never have realized this unless I had grown a beard, but it does affect my self-confidence. Surprisingly, my beard is like a mask for me. I feel as though I have more self-confidence in the way I look when I am bearded. Whenever I have shaved the beard off, I almost felt naked. Something wasn’t right, I felt uncomfortable. I’ve had a beard for so
long now that it has become a part of my personality and who I am.

There have been mixed reactions from women. Some really like it. Some don’t like it at all. And some say they like it when it is kept short and neatly-groomed. Most men compliment me on my beard. I have to admit I love walking down the street and having random people tell me that my beard is awesome. My girlfriend loves my beard and has encouraged me to keep growing it long. When I was single, I tried to keep my beard neat and trimmed because I felt that most girls either don’t like beards or, if they do, they want them to be neat and trimmed. But my beard is a part of me. So either you like it or you don’t.

You say that you plan to be bearded from now on. What led to that decision?

At this point, my beard is a part of who I am. It reflects my personality and my outlook on life. If I didn’t have it, I would feel like a part of me was missing. That being said, I am a man of constant change. I like mixing things up every once in a while. So while I do plan on being bearded from now on, it will most likely go through many variations of length and styles.

How full and thick it grows in.

I don’t like my mustache. It is too thin and wiry. Ideally, I would like to be able to grow a “Tom Selleck” mustache. But what I have is better than nothing.

Absolutely. Physically, not a lot of men can grow decent full, thick beards. So even though I personally had nothing to do with it (genetics and all), I take pride that I can grow a great beard. I feel that because I can grow one, it is my duty and responsibility to grow one. I feel that more men who have the ability should grow a beard and more people should encourage it. I’m fairly happy
with my beard. On a scale of one to ten, I’d give it a seven. Like I stated before, I am not very satisfied with my mustache growth. I’ve seen a lot of beards out there better than mine, but I’ve also seen a lot worse.

Do what you want to do and don’t worry or care what other people think about you.

Absolutely! Come on guys, help me bring the beard back!!

I’m honored. I’ve seen some really amazing beards on beards.org and to be counted among them is amazing. Thank you for including me.

It’s the best web site about beards on the net. It’s a great reference and point of inspiration for the bearded and aspiring-bearded alike.

Click on the image below to go to Joe’s photo album.

Above: Joe is pictured with other members of the band Happy Balky and the Good Livin’.