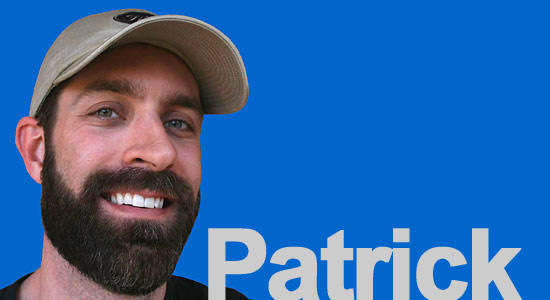 all about beards is honored to present Patrick’s picture-perfect beard success story. Not only does Patrick have a terrific story about his beard-growing experience, he produced an amazing beard as a result. Patrick’s new beard is so impressive that he is included in both the success stories and featured beards on the site.

In addition to creating picture-perfect documentation of his beard-growing progress, Patrick writes a compelling tale of the beard-growing experience. He also kindly offers advice and encouragement to other would-be first-time beard growers.

Patrick and his lovely wife have done a wonderful public service by making his beard-growing endeavor a big success and by sharing it here on all about beards as an inspiration and guide to others.

A few times in the past I had gone up to 8 to 10 days without shaving, but then an event would come up that I felt I needed to shave for. This site played a role in inspiring me to go beyond my “comfort zone” and commit to growing a “full” beard.

Yes, I looked through a great deal of the pictures to get ideas about what I liked and what I didn’t. If you are interested in growing a
beard for the first time, I would suggest you take the time to scroll through the many pages of beard pictures in the gallery.
You can probably find some that you can use as a model to achieve the look you want.

I work in the software industry and office from my home, which means I had the beard growing advantage of not seeing my co-workers every day. I started growing the beard during a slow week where I didn’t have any external meetings. That work week, combined with the weekends on either side of it, gave me 9 days of growth, which was close to the longest I had ever gone without a fresh shave. That’s about the time I found this web site and decided I wanted to make a run at a full beard. At about three weeks I came to a major crossroads: I had an important client meeting that my boss and other colleagues I don’t see very often would be attending. Having come much further with my beard than I ever had before, I was eager to keep it growing. However, I did not want to show up for a big meeting and learn that my beard didn’t fit with my boss’s idea of a professional image. I decided I should ask my boss in advance (on the phone) for his general opinion about beards. To my delight, he said, “Well, Larry Ellison, Steve Jobs, and our own SVP all have beards. If you’re letting your whiskers grow, that’s cool. I can’t wait to see it”. When we met at the airport before our meeting I was happy to see that his reaction was indeed very positive. His genuine endorsement removed my last remaining fear and gave me the green light to continue growing my beard. The general feedback I was getting from most people started to become much more positive and I ultimately became convinced that my beard met with proper social and professional standards and was appropriate for any occasion. It was at this point that I made the firm commitment to grow my beard to “maturity”.

There remains only one problem, but unfortunately it’s a big one. My wife, the great love of my life and mother of my children, doesn’t like it. She has been very supportive of the beard growing process, but it is definitely not her preferred look.

I knew that I wanted a full beard. The main options I considered were related to fullness and how to trim and shape my cheeks and neck line.

For the first several weeks the trimming of the “top cheek line” of my beard was an ongoing grooming project. I had three main goals:

I considered the process of establishing my top line to be complete when I got to a point where I’d already made firm decisions about which hairs got to continue growing and which ones I would routinely shave. This element of grooming then became simple trimming maintenance. For me this process was wrapped up in about 4 weeks. To anybody considering a new beard, I would share this advice about trimming: let your beard grow a few weeks before committing to a top cheek line. It is fine to snip the top outliers and give your new beard some general shape, but don’t make any big decisions and cut too much off or you’ll be faced with one of two undesirable options: either committing to an ongoing high-maintenance grooming nightmare, or having your beard look awkward and uneven until it fills back in.

With respect to the neck line, at about 4-5 weeks I noticed that my neck line was creeping farther down my neck. I think there were two main reasons for this: first, when I would routinely shave my neck with the razor I wouldn’t always get the line high enough — I would essentially shave right underneath the neck line. Over time, this caused a slow southern drift. Adding to this problem, my hairs were getting longer and more difficult to evenly trim with the razor. I found it was helpful to shorten the hairs on my lower neck with the
beard trimmer, creating a tapered effect from the lowest point up to the bottom of my jaw. This not only makes it easier for routine neck line shaving but it also keeps my neck from looking too thick and bushy. But thinning this hair wasn’t enough to reverse the already-lowered neck line. I had to face the inevitable — I needed major beard surgery. I needed to use the trimmer to create a new, higher neck line. I decided to solicit the help of my wife to carry out this delicate procedure. When she was finished, my neck line indeed looked better than it ever had before.

Shortly before the last batch of pictures for this profile, I made a substantial change to my neck line at the ends (under my ears). I removed some hair and re-shaped the line. I have included pictures of the before and after effect. I wish I had made this change sooner.

Yep. I have included a picture of the tools I relied on to trim and shape my beard. 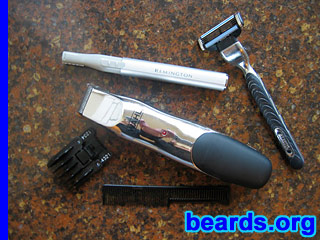 Mostly positive, but I have mixed feelings about it. It has been a lot of fun to undergo such an amazing appearance change. I personally like the way I look with a beard, but I don’t know that I would want to keep the look on a permanent basis. In some ways I don’t think I’ve let myself get too attached because I have always known that since my wife doesn’t dig it, I can’t keep it forever.
It will certainly be interesting to see how much I miss it when I shave. I have heard that many men mourn the loss of their beards and think their faces look skinny without it. I wouldn’t be surprised if I really miss mine when it’s gone.

Yes, a great deal. I think I was inspired by this web site to chronicle the growing process with all the pictures. And since I think this site is a great place for information, I decided to contact Steve and volunteer to do this bit. I initially felt reluctant about putting all these pictures of myself on the internet, but I figured the only people surfing at all about beards are other guys interested in beards…

During the first couple of weeks of growing I got a lot of questions and remarks that clearly had negative connotations. And the feedback from my family wasn’t very positive, either. But once my beard reached a certain point of maturity (15-20 days), then the nature of people’s comments became a lot more positive. I have talked a lot about what other people have said and my concerns for their opinions, but the truth is, I grew my beard because I wanted to. It has always been something I did just for myself. In some ways the beard has served as a mile marker for this time in my life — the bearded period. 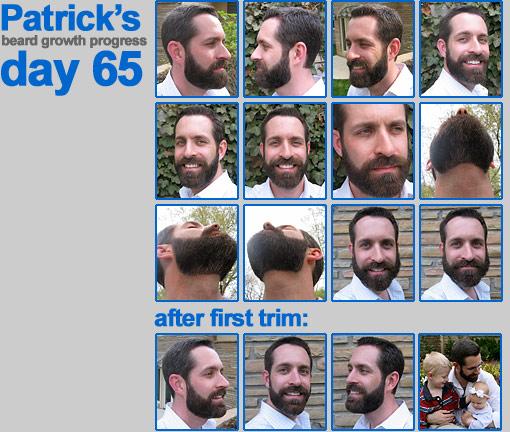 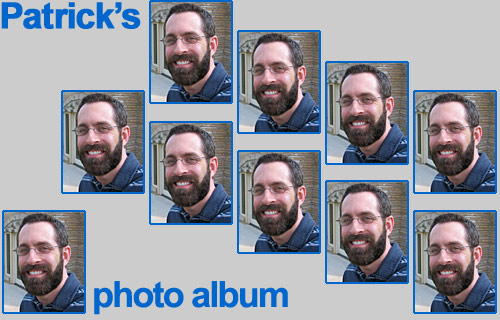