Twenty-one-year-old Keith started growing his current beard because the singer in his band (also a major beard fan) wanted Keith to have a beard by the time of their CD release party in September of 2006. The request to grow a beard came in mid-August and Keith agreed to do what he could. A couple of weeks later, Keith challenged a friend to a beard-growing contest in which the last to shave would be the winner. They recruited several other competitors, too. By mid-December, Keith was the winner. He made a commitment not to shave for at least a year, which would mean staying bearded into August of 2007. He says that he has a feeling that he will still have his beard long past its one-year anniversary. 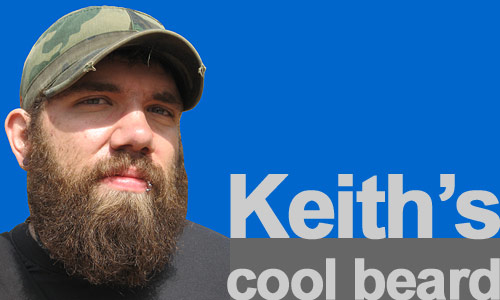 Be sure to visit Keith’s photo album.

I think beards are great. They are difficult at times (i.e. the itchy stage or the phase where it doesn’t look full). But they take dedication, and that’s what I love — the challenge.

Why did you grow your beard?

I grow a beard because I enjoy the way it looks, I’m encouraged by others to grow it, and I feel a little more masculine when it is in full swing (haha, not really though).

My dad grew a beard when I was younger and I was always irritated by it. So I really had no desire to grow one on my own until I realized I actually could and others around me were embarking on the same journey.

My father had a beard and my grandfather on my mother’s side usually had some pretty thick stubble. I don’t really think their beards had any influence on me. The only real influence I had was, once I set out to grow a beard of my own, I knew it wouldn’t be too hard because my father has thick, full, facial hair.

I was motivated to grow a beard in my freshman year of college. All my good buddies were banding together to embark through “no shave November”. That first year I didn’t even make it through the entire month. I got home for Thanksgiving and I just thought it looked scraggly so I shaved it off. After that, I continued to have some amount of stubble almost all year
round. The second year that “no shave November” came around, I stuck to it and made it all the way through half of February. This is really my second time growing a full beard and I haven’t touched a razor since mid-August.

Like I mentioned earlier, I didn’t give the first one enough time and just felt it looked gross. The second time I went into it with more dedication and felt that it looked really good and full.

When I don’t have a thick beard, I usually shave my mustache because it is slower to fill in than the rest of my face. So I kind of have the Abe Lincoln thing going on. Usually when I shave my beard, I rock a pretty ridiculous style for a couple of weeks. I had some pretty sweet mutton chops two years ago. When I shave this time around, I plan to do some pretty sweet stuff with it.

I wouldn’t say that my beard plays into my self-confidence. In reality, I think it takes away from it some because I don’t trim my beard and most of the time it looks very unkempt. I think at this magnitude, it doesn’t play into my attractiveness. But my beard isn’t for anybody and I’m not too worried about impressing anyone at this time, so I guess the attitude I have is, “Why not grow my beard freakishly long?” I can definitely say that it has had no effect on my personality.

People love my beard. I mean, there is the occasional female who thinks it is disgusting, but I feel that I have inspired many men to gather together and grow their facial hair.

I feel that I am going to have my beard for a good length of time this time around. I do occasionally enjoy a clean shaven face, and my beard is getting heavy at times, so I know I will enjoy a good shave eventually. But I do enjoy having a beard, and knowing that mine comes in nice and full, I have no problem growing at any point where I am inspired to have a beard again.

Would you recommend to other guys your age to grow full beards?

I do all the time. I play in a band and kids with some form of facial hair come up to me all the time and ask what my secret is. There’s no secret. There’s only dedication. Even if your beard seems patchy within the first month, stick to it. Just give it time and even the patchiest beards will look full.

I am really excited about being featured on beards.org and so are all my close buds. It almost it like some sort of reward for the dedication I put into my beard. 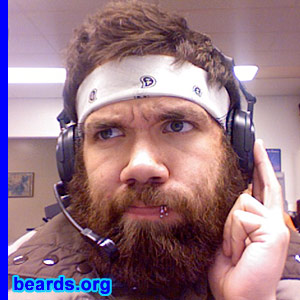 Click on the image above to go to Keith’s photo album.