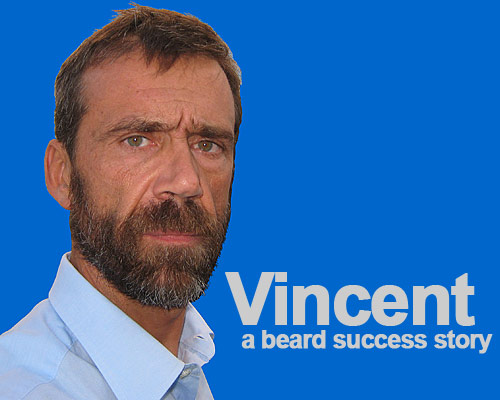 Vincent sends a compelling beard success story from France. Scroll down to read Vincent’s remarkable story. Also, be sure to visit Vincent’s photo album. In his photo album, you will see Vincent’s beard progress through various stages of growth.

UPDATE: View a new set of photos of Vincent.

Photos are courtesy of Vincent and are used with permission. All photos are subject to the site’s conditions of use. Click on the photo below to go to Vincent’s photo album.

It must have been two years ago. I was browsing on the Internet, trying to find good tips on how to grow a goatee. I was immediately hooked by the all about beards site, which ever since has remained a favorite.

My attempts at growing a beard had always been unsuccessful. I would invariably cease to shave when on vacation. After a week, and sometimes a drastic haircut, I was really pleased with my new look. But I couldn t even imagine going back to work unshaven. Seeing all these bearded guys on the site with their different looks, styles, and ages first made me feel frustrated. Then it really helped me start a real motivation. I had to be a part of it, too. 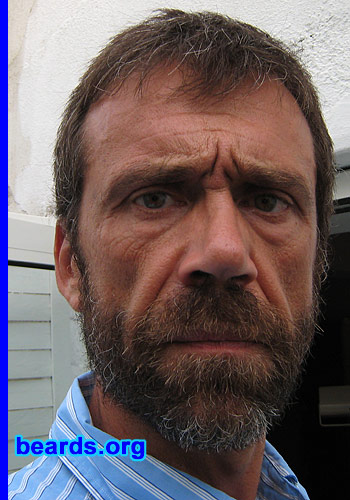 The site’s information on growing a beard was really helpful. It made it all look so easy: a three-phase master plan, brilliant in its simplicity. The idea was to gather enough motivation to start the beard-growing process. It was very challenging, too. Shall I have enough character to do it? I had not even started and I was looking forward to the stage when my beard had grown, against all odds, into something awesome that I could give it all the attention required.

I’m rather shy and, even after I discovered the site, I had several aborted tries at growing a beard. I don’t really like to stand out. There’s nothing I hate more than to attract attention. So even though it was very exciting, looking at my face change day by day, it was also energy-consuming. Being too self-conscious, I was not acting very natural. It might sound rather silly, but the trick to keep going was to postpone shaving until the day after. I would go to bed saying to myself that I would shave first thing the next morning, knowing very well that, being a late riser, I would never have enough time. But I kept my beard for a longer time with each growing attempt, even if in the end, I would always find a good reason to get rid of it: I had not invested in a trimmer; disturbing as it was, this beard was distracting me from my usual work dedication and might not be too good for my career. And I would end up mourning my defunct beard, not liking my face anymore, and being depressed for a while that I had failed once more.

Having a rather thin face, a mustache would have been kind of grotesque. Besides, mustaches seemed to be rather out of fashion. Not having much facial hair on the side of my face, I was thinking of growing a goatee. Here in France, full beards seem to be the privilege of older men, whereas goatees are rather widespread. The site radically changed my vision on beards. Going through the many pages of beard pictures in the gallery, the full beard became an option which gradually imposed itself on me. A full beard was not necessarily dull, carrying an image of wealth and respectability as in the 19th century. Neither was it a mask or a screen behind which one could hide. On the contrary, it could enhance a man’s qualities and help to express all kind of emotions. To be convinced, I just had to look at Steven’s photographs, who never looks the same twice. A beard could be a work of art, an act of rebellion. It could look very sexy. It could just be beautiful in itself.

I’ve read the tips on how to groom a beard with great interest. Women are encouraged to show their differences. Men are not, which I found unfair. It’s a pleasure to choose in the morning the tie that will match perfectly a shirt and a suit. It’s fun to give my beard its daily shampoo. I really enjoy trimming my beard once in a while. And trimming my mustache is what I like best. I should invest in better tools, though. I use a very basic trimmer and my cheek lines are messy.

I like my face with a full beard. I’m just amazed that what was only yesterday a dream, is now plain reality. It seems that all my previous inhibitions have suddenly vanished. I’ve not trimmed my beard for a while, but I won’t let it grow much more, though. Being kind of tall and lean, I might end up looking like some kind of gaunt, quixotic character, which is really not what I want. My face looks fuller, more mature. It makes me look older, but I couldn’t care less. They say that clothes don’t make the man. It’s true that appearances may be deceiving, but at one point, you have to choose who you are. A beard might look just like a facial ornament, but it also represents the manly values you stand for such as courage, honesty, straightforwardness… In the end, it might really help you change into somebody else, a better person, in any case the person you’d like to be. Do I look sexier now? I think I am in some ways, but I am not really the one to answer this question. So here I stand, somewhat elated, with my feet on the ground (so it seems) and my head in the sky, my beard being my new center of gravity.

It’s a great experience, watching day after day the radical changes that the beard-growing process brings to your face. It’s a real satisfaction not to let other people’s criticisms and comments deter you from your commitment.

I wouldn’t say that people were very supportive, especially in the beginning. I was inflicted with nasty remarks. I was told that my beard had no style, that I would pass at best for a hermit or a fundamentalist. Working in a bank, my fears that my new appearance would affect my results proved to be groundless. On the contrary, I look friendlier, more reliable, reassuring, and fatherly in some ways, which is more of an asset when trying to convince people. I have to say that what really matters to me is the reaction of other bearded men. Once, a client with a really noteworthy long beard nearly hugged me, saying something like, “He has a beard!”, which really sounded like, “Welcome to the club.” It was just great. On the whole now, people don’t seem to care anymore. They’ve accepted me this way. I don’t catch people’s attention, which is really all I want. It means that it looks natural. In a way, it gives legitimacy to my beard.

How do you feel about the overall beard-growing experience? Would you recommend it to others?

It’s probably an experience that every man, provided he feels like it, should do at least once in its lifetime. White beards are beautiful, but I wish I could see more young guys with full beards. The effect is more striking. Sometimes watching men who obviously would have a huge potential, but who remain clean shaven, I can’t help feeling a little jealous, imagining what I could have achieved had I been allotted a more remarkable pilosity!

Click on the photo to go to Vincent’s photo album: 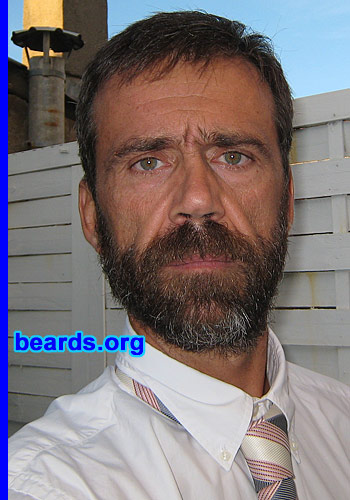