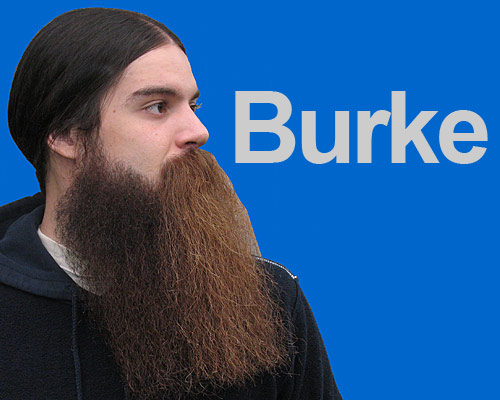 All about beards is honored to present Burke, the first genuine world champion beard grower to be featured on the site! Burke won the title of world champion in the full beard, styled mustache division at the World Beard and Moustache Championships in Brighton, England on September 1, 2007. The photos in Burke’s beard feature are exclusive to all about beards. All photos are courtesy of Burke and are used with permission. The photos are subject to the site’s conditions of use.

Be sure to visit Burke’s photo album.

A beard is a man’s natural beauty and I say this with no intention of offending men who cannot grow beards. There are a variety of options to choose from when it comes to decorating your body. You have major stuff like tattoos, scars, and piercings. Then you have minor stuff like hairstyles, makeup, and clothing. You can even decorate yourself with a ballpoint pen if you want to go into specifics. But no, really, what’s more badass and true than a man with a full natural beard? Okay, forget that for a second. Notice that all of the bodily decorations aforementioned are quick, expensive, and sometimes painful. The beard is the only natural decoration that is a slow, proud process, that is inexpensive to maintain, and that is never painful. It’s shaving that’s painful, plus it displays lack of patience.

So when I’m asked what I think of beards, my answer is that they’re the superior form of bodily decoration. One who wears a beard is a true man’s man.

I grow my beard for three reasons:

Yes, but I don’t remember how old I was.

My father has had a mustache for 30-odd years, so there was definitely some influence there. He grows a beard now and then in the cold seasons.

Curiosity. I started shaving at age thirteen and painstakingly shaved for four years before I was able to grow a full beard.

It was a decent beard for a seventeen year-old, but it wasn’t completely full.

I selected the full beard after experimenting with many different styles for three years. The full beard was the one thing I hadn’t tried. I think the full beard is definitely the best facial hair style, but I do miss having just a mustache. Sometimes I wonder if I still look the same underneath this three year-old beard.

With your beard growth, you’ve gone for the spectacular beard.
What’s the story behind that?

I am a man of quality. A spectacular beard is what I can grow, and I’m not settlin’ for any less.

My beard boosts my self-confidence. There are those who choose to make fun of me, but I know they don’t matter. They’re all jealous, beardless freaks anyway. I feel my personality is the same as it always was — I’m a calm, humble young man with a good sense of humor.

People react to it in countless ways, positively and negatively. The saddest reaction is from those who don’t speak, but whose eyes show immense fear and hatred, especially young kids. I can tell it’s from the way they’ve been raised — you have to be taught that hate. On the other hand, I get a lot of positive attention, but I’m just not always in the mood for it. I feel like a skipping record sometimes. I like to drink, but dislike the party and bar scene. That’s where the reactions get offensive.

It’s a hard decision. Do I keep the beard and let it get bigger and better? Or do I shave it and increase my chances with women my age? I’ll tell you one thing. Even if I did shave and got “the girl,” I wouldn’t be satisfied with my non-bearded self.

The best thing about having a beard is the friends I’ve made in the beard community. I compete in facial hair competitions, but I’m not a super-competitive guy. I go to have fun and meet new people. It’s satisfying to grow a beard and be able to do something with it. The competitions I go to combine that with my love of world travel.

The thing I like best about my beard is that it just keeps getting better as time passes on.

If they can, yes. If they can’t, I say keep shaving and hope that it gets fuller and thicker. I see many half-assed beards on my college campus, and it disappoints me. Scraggly, unkept facial hair gives beards a bad name. If you’re going to grow one, grow a good one.

I feel honored to be featured on beards.org, but I’m confused because most of the featured beards are short, trim beards. 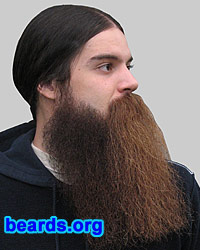 Click on the image above to go to Burke’s photo album.