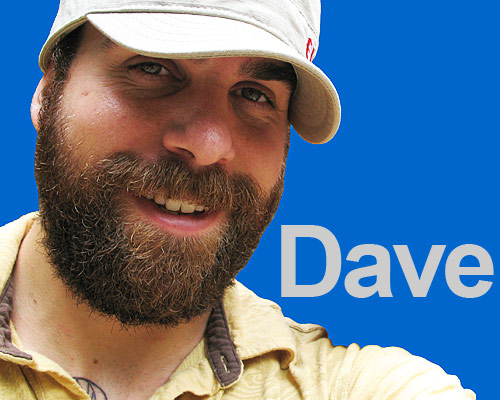 All photos are courtesy of Dave and are used with permission. The photos are subject to the site’s conditions of use.

Be sure to visit Dave’s photo album.

I think a beard is a peculiar quality by which a man is distinguished from a child. I feel a beard is very masculine, and is a badge of self-confidence. They look very natural, giving a man wearing the full beard the impression of being genuine, unforced, and true to being oneself.

I have had full beards before, but they were always short-lived, or shaved off into other fun styles. I didn’t have the encouragement, and support that I have now to grow a full beard. I honestly thought it was just another fun idea, but now that I have made the choice to have a full beard, I hope to inspire others and try to change some negative views on beards.

I always wanted a beard, as far back as I can remember. My dad would leave for the hunt with other family members and not come home for a long time, leaving with only a couple weeks of stubble. But when he came home he was fully bearded, still dressed in his hunting clothes, bringing home a bounty of meat for the deep freeze. So primitive, but that is exactly what attracted me to it. Everyone left for the hunt with a little stubble, and come back as bearded men.

The fact that I could grow facial hair and no one else could. When I was fifteen, I tried for the full beard but wasn’t able to attain solid growth on my cheeks, so I went with what I could grow: a goatee. No one gave me any encouragement the first time, especially my mother.  She told me years later that she didn’t want me to have any facial hair because that meant “her baby wasn’t a baby anymore.”

Well, at the time I thought it looked very patchy, so I shaved it off to a goatee fast, avoiding the first stage of growing. I didn’t have any resource on how to grow a full beard and became very discouraged early in the growing steps. I wasn’t happy at the time, but if I had the knowledge and patience I have now, I think I would have been pleased with my first growth.

While talking to my girlfriend Miranda about the idea of growing some kind of facial hair or a beard, I decided to look for some photos of other beards to give her an idea of what I was looking to do. We searched on Google and found all about beards. We looked at the photos, read through the featured beard and success stories. Here was all of the information, photos, resources, and personal stories that we both needed. We quickly bookmarked the page and used it over the next week to make my final decision. I was afraid she wasn’t going to go for this idea of having a full beard, but she is very supportive of my beard growth and encourages me. She is a great girl.

When we first found the site I was looking for different styles to play around with — nothing that would last long, just a quick fix until I found what I wanted to do with my facial hair. First idea was a chin curtain, then I thought about bringing back the handle bar mustache, but after looking around and reading the stories, I couldn’t get the idea of growing a nice full beard out of my head. I went through a lot of the featured beards with Miranda, making us both excited for the growth process.

Yes it was. Any other time I grew a beard, I shaped it too early and was never happy with the lines that I shaved in. This time around I shaped it on the day of week four, taking my time, cutting off little by little until I found a line that I was happy with.

Throughout week two, I felt like cutting my own head off with a spoon because it was getting so itchy. I just kept giving my beard a good scrub in a hot shower, and visiting the site for some encouragement. I knew the itching would subside. It had just been so long since I have had any facial hair, my skin was reacting unfavorably . I wanted a beard so badly though, it could have
been ten times worse and I still would have stuck it out. Other than week two, I never thought about shaving once.

By reading the success stories and feature beard pages on all about beards. Before I visited the site, I was looking for a quick style I could just shave in, but once I was here, I quickly changed my thoughts and decided on the full beard.

Very much so. When I grew beards in the past, I never used shampoo on them. I would use whatever body soap that I had. This time around, I use shampoo and conditioner and I notice a huge improvement on how soft my beard stays. I also never owned a beard trimmer before, so I ran out and bought one before even starting my beard. I used a hair trimmer before, but the maneuverability of a beard trimmer and the different attachments it comes with makes styling much more easy, with less chance of making a mistake.

Other than the very itchy week two, I really enjoyed the growth process. I love taking pictures every two or so weeks to see the difference between stages for myself. Seeing how the beard looks at your recent stage, comparing your beard to prior stages, makes you excited to see the next stage.

I love it. It has changed my appearance in a very positive way. Everyone is so supportive of my growth, and a lot of people are very excited to see how big my beard is going to get. I feel a lot more comfortable with a full beard than I did with a shaved face. I also noticed that the skin on my face is as healthy as it has ever been since I have had my beard. I don’t have one thing to say negative about being a fully-bearded man.

How have people reacted to your beard? How do you feel about their reactions?

I have received mostly positive reactions. Everyone thought I was crazy for starting my beard during the hot month of July. But now even those people who just shook their heads like my beard and are looking forward to its growth.

I have been thinking about that a lot. I really want to stay bearded, but I did make a promise to my best friend’s fiancé that I would shave it off before her wedding. I am in their wedding party and would shave if she wanted me to. But I think she is going to tell me to keep it. She is also supportive of me growing a beard now. I think she was just worried that I was going to have an unkempt beard. If I do shave it off, I will be growing a full beard back right after the wedding.

I like that it is about six different colors, giving my beard a different shade. I have red, brown, black, white, grey, and blond whiskers, most prominent being brown and black. During the summer, the sun lightens up my beard giving it a golden look. In the winter, it turns dark brown.

Yes I do. I try to get everyone that I know that can grow a beard to grow one. I believe that media has affected the way the younger generation (and our generation) on how we think of beards. The media, in my opinion, have a form of cultural dictatorship, choosing how they want people to look by what products they are trying to sell. There are many publications on media’s effect on
women, but not many on the effect of men. I feel that the media has affected the way beards are looked at in a negative way. There are no fashion advertisements with men with beards, the television crews that give us our news are cleanly shaved. Even the picture of Adam and Eve in a school book shows a cleanly-shaved Adam. But it was only twenty to thirty years ago that body
hair and a full masculine beard were not only the popular way to look, it was considered very sexy. So if you can grow a beard, grow one. Not only will it make you feel good about yourself, it is still considered to be sexy, no matter what the photo on the advertisement says.

It’s great! It is some of the strongest support a guy can get! I hope this feature helps someone else grow a beard, just like the other featured beards helped me make the decision to grow mine. 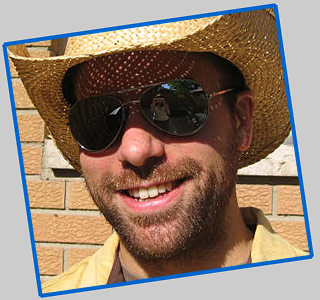 Click on the image above to go to Dave’s photo album.