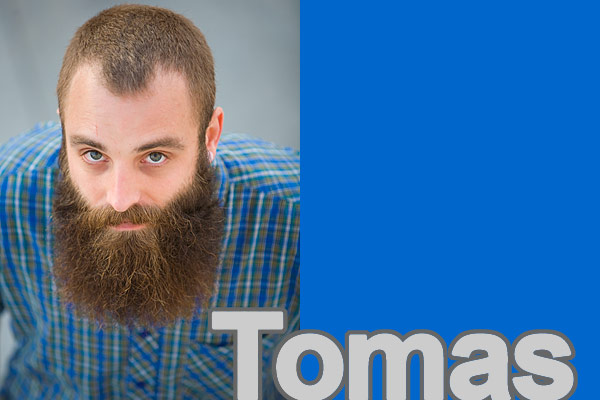 all about beards is pleased to present Tomas in our featured beards section. His beard feature and photo album are illustrated with photos taken during a photo shoot exclusively for beards.org. More photos from that photo shoot will be added in further updates. All photos are subject to the site’s conditions of use. 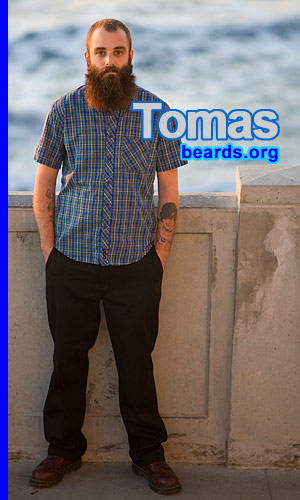 Scroll down to read the story of Tomas’ tremendous beard. Also, be sure to visit Tomas’ photo album.

I think beards are handsome and cool. One of the main reasons is that covering part of your face draws the focus to the most attractive part of most faces: the eyes.

I decided to stop trimming or shaving about a year ago when I went from Stockholm to San Francisco. The experiment turned out to be interesting and now I want to see how long I can get it.

I’ve always wanted to grow a beard. And I did grow a pretty pathetic little goatee as soon as I could, when I was fourteen or fifteen. Since then, I’ve always had some kind of facial hair.

I had a stepfather and an uncle that sported great beards. I don’t know if they influenced me, but I always liked the way it made them look.

Part of my motivation was to make me look older. I always felt older than I was and a beard was a way of making me look more distinguished. Later on, it sure helped me getting into bars before I was legally allowed.

I’m guessing I was pretty proud, even though it probably looked pretty sad.

I’ve had most styles of beards and all of them have had their charm. The only style I’ve never had, and never really appreciated, is the super-angular, sculpted, overdone variety. I’ve seen a few people get away with it, but usually it just looks too thought out.

Not really, but it does change how other people perceive me. And that might, in turn, have an effect on how I see myself.

Mostly positive, especially from other guys. Ninety per cent of all attention is positive. But the occasional drunk girls pulling on it and the endless Ché Guevara, ZZ Top, and terrorist comparisons get kind of tedious.

I’ll most likely stay bearded. I don’t know in what shape or form, though.

Not having to sit next to anyone on the subway.

I’ve learned that people are insanely afraid of aging. The beard haters all tell you the same thing: why would you want to look older? It’s strange to me that looking older necessarily would be a bad thing. On a more technical note I’ve learned that combing some body lotion in to it makes it less frizzy and easier to manage. I’ve also learned to always keep a hankie in my back pocket,
should I spill food or drink in my beard.

Click on the image below to go to Tomas’ photo album.