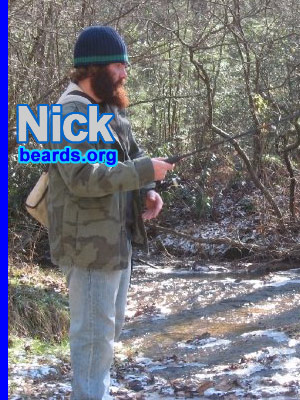 all about beards is pleased to present Nick in our featured beards section. Nick loves the outdoors and enjoys activities such as fishing, hunting, and camping. He has played baseball for most of his life, but also loves other sports, including football, basketball, golf, and beer pong. He currently works at the student recreation center of a large university.

This page and Nick’s photo album are illustrated with photos provided by Nick that are used with permission. All photos are subject to the site’s conditions of use.

Scroll down to read the story of Nick’s amazing beard. Also, be sure to visit Nick’s photo album.

In my opinion, a beard represents respect and masculinity. I think it takes a certain someone to pull off the bearded look. In today’s society, a beard is somewhat frowned upon (e.g. employers making one shave in order to work there). If I ever had my own business, I would personally make the requirements of a quality beard in order for that person to be considered for employment.

Actually, no. I knew no family members who had a beard. As far as I know, I’m the only one in the family capable of growing one.

What motivated you to grow your beard for the first time? How old were you?

The first time I grew a beard was when I was eighteen and a freshman in college. I’m pretty sure it was just because I was too lazy to shave.

I thought my first beard turned out exceptional, so I decided to grow it out for a couple of months.

You grew your beard on a bet. What’s the story on that?

It all started on June 18th, 2007. A couple of friends and I were talking about the beard that I had at the time (which was about two weeks in). They challenged me to grow my beard along with them until Christmas at the end of the year. I accepted, under the circumstances that whoever shaves has to take the other guy or guys out to a bar and get them drunk. Needless to say, I won the bet and just to bury the hatchet, continued to grow my beard until the second weekend in February of 2008 (approximately eight months of growing).

Had you been growing your beard regularly before the bet?

I always grow a winter beard for a minimum of three months, starting from October 31st until February 1st. 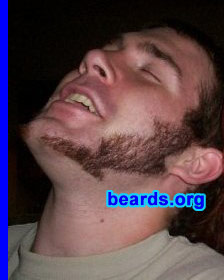 I like the full beard because there is less maintenance. But I have also grown many other assorted styles of facial hair. You name it. I’ve done it.

You’ve grown your full beard to a pretty large size with natural cheek lines and a natural neck line. These days, that must have taken some courage and determination. What motivated you to grow your beard this way?

The bet said no trimming and or shaving. So basically, I just let it grow where it grew and it turned out pretty good.

Isn’t the bet over now? If so, why do you grow your beard now?

I actually have just recently shaved my beard into some lightning-bolt chops.

Actually the beard got me more respect from my friends and people I met.

Your big beard must make you really stand out in the crowd. How do people react to your beard? How do you feel about their reactions?

I definitely get a lot of looks. You can tell that people just look at it and are thinking, “Damn, that’s a huge beard.”

You indicated that you are an occasional or seasonal beard grower. Why not stay bearded permanently?

I like to switch things up every now and then. I use my beard-growing capabilities to my advantage. It grows so fast that I can usually sport something in two weeks or so.

Keeping my face warm over the winter.

What do you like best about your beard? Do you take a lot of pride in your beard?

I like the auburn-to-red color of my beard. My beard is my pride.

I have learned that it takes a lot of work and patience to grow a beard for eight months. Also: longer showers.

I highly recommend it. It’s what men do.

It’s an honor to be featured on beards.org and I thank you for the opportunity.

Click on the image below to go to Nick’s photo album. 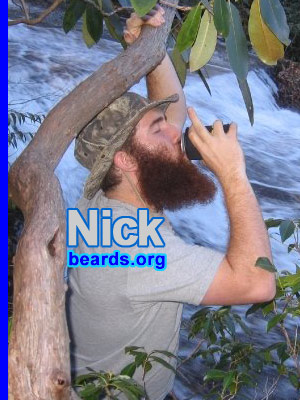