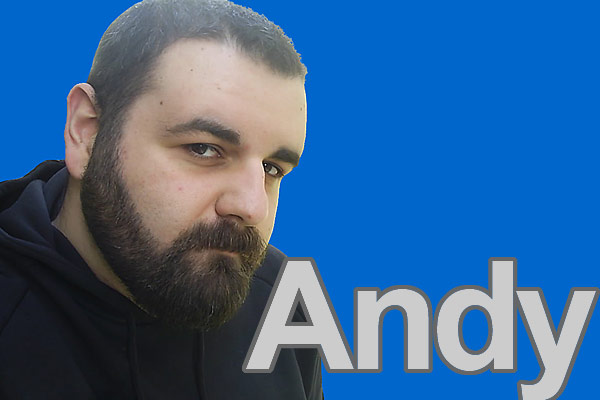 all about beards is pleased to present Andy in our featured beards section. Andy joins us from bella Italia. Scroll down to read the story of Andy’s excellent beard. Also, be sure to visit Andy’s photo album. 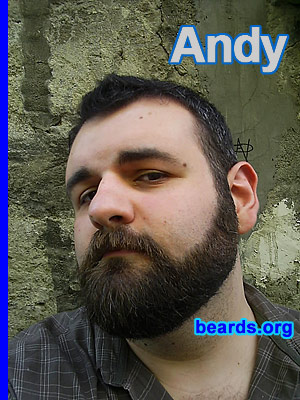 This page and Andy’s photo album are illustrated with photos provided by Andy that are used with permission. All photos are subject to the site’s conditions of use.

I think that the beard is the most fascinating feature of a man’s face, for its power to change radically the appearance of a person: having a beard (or, on the other side, shaving it) does not only change the perception that others have of us, but changes our own perception of ourselves. I’ve always found this chance to switch between these two forms very interesting, especially in these years, in which the will to modify the body by surgery to fit one’s own perception of himself seems to be as necessary as the air we breathe. Men are luckier then women, because they have natural ways to change their appereance. Just an example: if you have a too-narrow lip, you can hide it with a mustache, while a woman only has the chance to undergo plastic surgery.

Basically, I don’t like the look of my smooth face. I’m a chubby guy and suffer from double chin. My beard helps me reshape the lower part of my face in a more comfortable look. I also like the feeling and the smell of the beard just washed. And I feel it’s relaxing when putting my fingers in it.

Do Italians (men and women) like beards? Why don’t more Italians grow beards?

in Italy the tendency of being not so friendly with beards is spreading: the model of male beauty displaying a smooth young man, with no facial or body hair, is quite familiar. It fights against a rural tradition that still sees in beards a feature of the respectable man. Beards are often associated with poverty (beggars are called “barboni” in italian, with means “great beard”) as homeless people usually let their beards grow wild. Or beards are associated with young rebels related to communism or socialism, who usually wear beards as a rebellion to the “shaved” middle class. But we have to remember that we come from a Greek and Roman ancestry, so in the intellectual world, the beard is still seen as a sign of wisdom and power. In universities, for example, you can find lots of bearded men. People of the south of Italy still have the tradition of the mustache: most men in their forties let it grow, as portrayed in many neorealistic films. Young guys usually prefer a short goatee. An old film with Marilyn Monroe said that men prefers blondes, but marry brunettes. Well, we can say that in Italy women prefer smooth guys, but then marry hairy ones. 🙂

I can’t remember when I started longing for a beard. My family was full of bearded men and I remember I was always asking when I would be able to have one myself. I often asked my mother to draw one on my face with her make up.

Nearly every male member of my family had one. I think I started longing for a beard just to feel “part of the clan”.

Besides the will to imitate my older relatives, I also tried to grow a beard to feel different from people of my age. I was very lucky. My first facial hairs came out at a very young age: ten or eleven. So I could grow a full beard at around fourteen, when everybody else in my classroom was still childishly smooth. My first attempt was a goatee, but I wasn’t so happy about it. I couldn’t handle properly a razor and a pair of scissors, so it looked very awful. My first good trim had to be made by the barber.

I think that everyone has a style that best fits the form of his face. I have chosen the full beard because it gives the best result on my face. I have tried other styles, like a goatee with sideburns or an extended goatee, but I feel more confident with my full beard style. Every man must choose the style most suitable to his face and to the strength of his beard’s growth. So I don’t think there is a perfect style above all others.

Of course it has. I feel completely naked when shaved, so my shyness tends to take control. I think my beard works on me as the security blanket of Peanuts character Linus: I feel lost without it!

Well, there is a wide variety of reactions, but most people like my beard. Longtime friends are so familiar with my beard that they don’t even remember me beardless.

As a musician, do you find having a full beard is an asset?

Well, I don’t think my beard could be related to the music I make, but certainly it is part of the public character people see when I perform. So it makes me easily recognizable.

When I look into the mirror and still I’m surprised about how beautiful it looks. 🙂

I like the fact that it’s thick and soft. I also like its colors, covering a vast range from black to red. I even like the white hairs that are starting to appear.

I have learned how important is to care about oneself. Growing and trimming the beard is part of the time I dedicate to myself. It’s not only a fact of hygiene, it’s a good manner to care for yourself and to be happy.

If I ruled the world, I would make the beard compulsory for all men. 🙂 My motto is “If you can, do it.” So guys, if nature has given you the gift of a good beard, let it grow!

I am simply honored. Since I found beards.org on the net, I told myself, “I want to be part of that!”. I like the way the beard becomes a way to communicate with others. And to me, your site also gives an important message against discrimination. I’ve seen all kinds of people from all over the world featured on beards.org, all united by the beard. The beard is the universal male feature that seems to remind us that we all belong to the same family, that we all are men. So, thank you, Steve, for making me part of the process. 🙂

Click on the image below to go to Andy’s photo album. 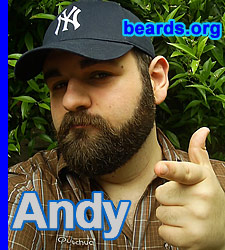