A new beard battle is about to start. It’s The Great Beard Battle, a Hyde Park, New York beard-growing contest. These brave men are competing in a beard contest during the sweltering summer heat. Wimps, they are not. We shall see! Kudos to their fearless webmaster and good luck to all the participants!

UPDATE: The battle fizzled and the link is no longer any good. 🙁

It’s been a rather dramatic day for beards.org. The server on which the site is hosted suffered a disk failure that required restoring the site from a backup. Unfortunately, the latest backup available was from a few days ago. So the beards of the world gallery has temporarily lost three photos and the view counters have been set back a bit. A new comment for the blog was also lost. The gallery images will be restored soon and the commenter on the blog will be invited to re-submit.

While the loss of data is not something enjoyable, at least the data lost this time was relatively minor. Ironically, I was going to take a new backup earlier today, but the server outage had just hit. Had I made it in under the wire, the data loss essentially would have been nil. The lesson here for everyone is one that’s been repeated time and again: back up, back up, back up your data! You’ll be glad that you did.

Also, as a result of the server outage, the site was missing in action for most of the day. I’m happy that it’s back now. I hope that you are, too!

As noted here and elsewhere, beards have been experiencing an upsurge in popularity lately. Is it a trend? The trouble with trends is that they come and go. Beards need not and should not come and go based on the whims of trendiness and fads.

When the current beard trend fades — which it likely will, as most trends do — many of the brave new beards will probably pass into history. How do we keep from losing the momentum of the current upswing in favor of beards? It’s not easy. The best thing to do is to think about beards as a component of manhood and not a fashion accessory. Grow the beard that you want. Don’t worry about whether it’s trendy or not. Be yourself and make your own statement by growing the beard that pleases you.

Gary, a new commenter on the blog, kindly sent in a photo of his great-great-grandfather: 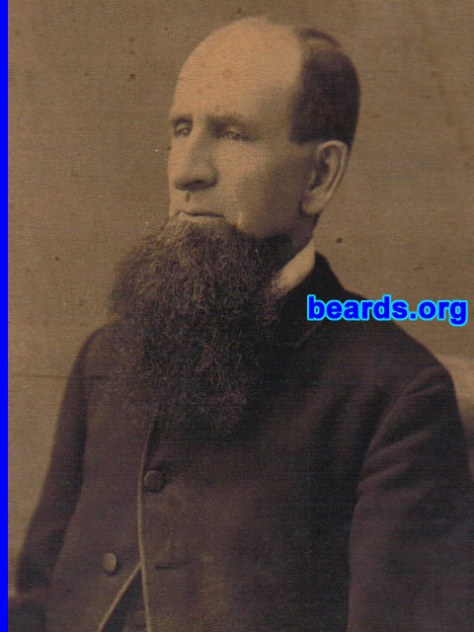 That’s quite an amazing beard! Thanks, Gary.

How would such a beard be viewed today? Too radical? Why? Gary’s ancestor looks like quite the sophisticated gentleman and the beard is the perfect accessory.

I recently was alerted to an online rant by a young lady. She stridently expressed her absolute and utter loathing of beards and body hair. According to her preferences, all traces of them should be removed from men. Interestingly, facial hair and body hair are two of the main male secondary sex characteristics, which are physical features that distinguish men from women. In essence, she was screaming for men to be more similar to women. What good is that? The physical differences between men and women should be celebrated rather than obliterated. Grow your beard!

In a recent comment on this blog, Joseph Alexander suggested that perhaps not all are worthy of the beard. While this site’s unrelenting message is to promote beards and to encourage the growth of beards, I recognize that beards are not for everyone. For some, the problem is the lack of facial hair follicles to do the job. It’s no fault of their own. That’s mother nature’s call and there’s not much that can be done about it. That’s why I encourage those who don’t have the follicles to produce a full beard to select another style that makes the most of the follicles that they have. If you have so few facial hair follicles that none of the beard styles seem to work for you, then it’s probably better to go back to shaving.

A beard, whatever style, should enhance your appearance. If it just doesn’t work and doesn’t look right, then maybe a beard simply is not for you. Just don’t be too hasty in making that determination. A new beard that may not appear to stand a chance may actually blossom into an admirable creation if given sufficient time. That’s why the let-it-grow-for-at-least-six-weeks rule is so important, especially for someone unsure of his beard-growing capability. Give it a try. If after six weeks you are happy with the result, then you’ve succeeded! If you are not happy with the results, you could give it a little more time. But if you come to the realization that the beard just did not work for you, it might be time to shave it. You might try again in a year or so to see if it turns out better the next time.

As the northern hemisphere heads into the summer season, some thoughts about beards and summer may be in order. Did you grow one of those “winter beards” and are now thinking of shaving it? Think again. Why not keep the beard?

You’ve made the effort to grow the beard and keep it until now. Why should the change of seasons call for eliminating the beard? Many suspect that it is too uncomfortably hot to keep a beard in summer. Most guys who regularly keep beards for the summer do not find that to be true. The beard typically acts as insulation, helping to keep the face a bit cooler. Similarly, the insulating effect of the beard helps to keep the face warmer in winter.

As part of a new project just getting underway here at “all about beards”, I’ve made available a set of beards.org stickers to promote the growing of more beards worldwide. You can find them here.

A longtime friend and supporter of the site — and commenter on the blog! — suggested another saying for a beard sticker. Given the current acknowledgement that beards have been growing in numbers, the statement about the bearded zeitgeist seems particularly apt today. As they say, “resistance is futile.” Grow your beard!

I have seen recent news articles noting that beards have enjoyed increasing popularity lately. I couldn’t help but notice that in most of these articles, the author expresses some bewilderment about the bearded resurgence and seems to hope that it cannot be more than a passing fad. Apparently, they would be happy to see all of these new beards vanish as quickly as possible. Rejecting the legitimacy of wearing a beard almost seems to be an automatic response!

There’s nothing bad or wrong about wearing a well-groomed beard. It’s basically the same as maintaining well-groomed hair on the scalp. Why the automatic frowning on beards? Just a conditioned response? Some re-conditioning is in order. Do your part to stir up the men’s fashion writers. Grow a beard and keep it!